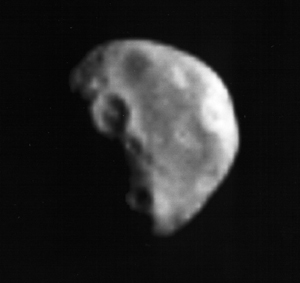 Dactyl is the first satellite of an asteroid to be discovered. Dactyl was found in orbit around 243 Ida by the Galileo probe when it flew by the asteroid in 1993. The little moon, measuring 1.6 × 1.4 × 1.2 km, was about 100 km from its much larger companion when photographed. Interestingly, the spectra of Ida (an S-type asteroid) and Dactyl reveal that the compositions of the two objects, though similar, are not identical; Dactyl is not simply a bit of Ida that broke off. Instead, it is thought that the binary system may have formed during the collision and breakup that created the Koronis family of asteroids. What seems certain is that the moon is a captured object – something created completely separately from Ida that happened to wander near the asteroid and be caught by its gravitational field. According to the laws of celestial mechanics, such an event would deflect the smaller object, but it would not be captured into orbit unless a third force of some kind slowed it down.

It is named after the Dactyli, a group of mythological beings who lived on Mount Ida. The Dactyli protected the infant Zeus after the nymph Ida hid and raised the god on the mountain.