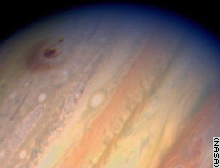 Impact marks in Jupiter's atmosphere from the collision of Comet Shoemaker-Levy 9.

Comet Shoemaker-Levy 9 (D/1993 F2) is the only comet ever seen to collide with a planet. It was discovered by Carolyn and Eugene Shoemaker and David Levy on the night of March 24, 1993 while it was in orbit around Jupiter. After coming to close to the giant in 1992, it had broken into a chain of 21 fragments, the largest some 2 to 3 km in diameter. These fragments rammed into Jupiter's atmosphere from July 16 to 22, 1994, creating fireballs and producing a series of black mushroom clouds, some larger than Asia, that that rose several thousand kilometers above the Jovian clouds. The vast black dark markings remained visible for months. Among the many space-borne instruments trained on this spectacular event were those of Voyager 2, Galileo, the International Ultraviolet Explorer, Ulysses, and the Hubble Space Telescope.