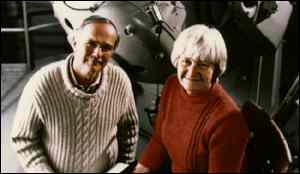 Eugene Shoemaker and Carolyn Shoemaker (neé Spellmann) were American husband and wife astrogeologists who made numerous contributions to the study of impact craters on Earth, lunar science, asteroids, and comets.

Eugene Shoemaker had hoped to travel to the Moon as an Apollo astronaut/geologist. When this ambition was sidelined by a health problem, he helped train other astronauts in geological methods for use on the lunar surface. He was also a major investigator of the imaging by unmanned Ranger and Surveyor spacecraft which, before any Apollo landing, revealed the nature of the Moon's cover of soil and broken rock that he named the regolith.

In 1994, Gene and Carolyn Shoemaker and David H. Levy discovered the short-period comet Shoemaker-Levy 9, which was subsequently seen to collide with Jupiter. Following his death in a car accident, some of Gene Shoemaker's ashes were placed aboard Lunar Prospector, a spacecraft that was later intentionally crashed into the Moon; his are the first human remains resting on another world.