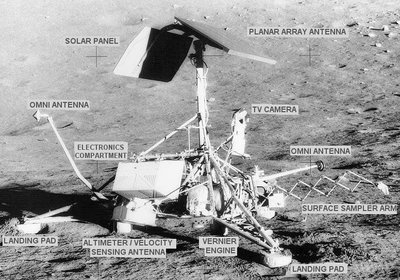 Surveyor was a highly successful series of NASA/JPL (Jet Propulsion Laboratory) spacecraft that soft-landed on the Moon between 1966 and 1968 and, together with the Ranger and Lunar Orbiter programs, helped prepare for the Apollo manned landings. Once the early Surveyors had demonstrated an ability to make successful midcourse corrections and soft-landings (proving, in the process that the lunar surface was not covered in a thick layer of dust, as some scientists had feared), the remaining Surveyors were used to evaluate potential Apollo landing sites.

Seven spacecraft were launched, of which five arrived safely on the Moon and returned data. Surveyor 3 was the first of the series to carry a surface-sampling device with which the spacecraft excavated four trenches up to 18 cm deep. Eighteen months later, the crew of Apollo 12 landed nearby and recovered Surveyor 3's TV camera and other parts. Laboratory analysis showed that terrestrial bacteria had remained alive in the camera's insulation during its time on the Moon.

Surveyor 6 became the first spacecraft to (temporarily) lift off from the surface of another world. On 17 November 1967, its engines were fired for 2.5 sec enabling it to rise 3.7 m above the ground. It was then commanded to move 2.4 m in a westerly direction and then touch down again. Following this maneuver, it continued its data-gathering mission, including the return of 30,027 pictures.