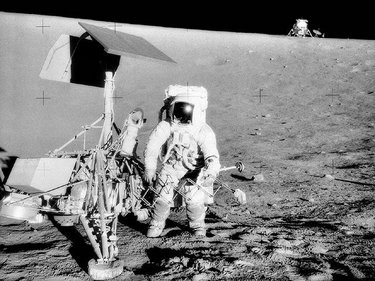 Surveyor 3 was an unmanned lunar probe – the third of the Surveyor series – which soft-landed on the Moon near Oceanus Procellarum on Apr 20, 1967. Two and a half years later, on Nov 20, 1969, Apollo 12 astronauts Pete Conrad and Alan Bean recovered the camera from Surveyor 3 and brought it back to Earth. When NASA scientists examined the camera they found that the polyurethane foam insulation covering its circuit boards contained 50 to 100 viable specimens of Streptococcus mitis, a harmless bacterium commonly found in the human nose, mouth, and throat. Since the camera had been returned under strict sterile conditions, it is evident that the microbes must have been on the probe since it departed the Earth and had survived 31 months in the absence of air or water while being subjected to huge monthly temperature variations and bombardment by hard ultraviolet radiation from the Sun. Conrad later commented: "I always thought the most significant thing that we ever found on the whole ... Moon was that little bacteria who came back and living and nobody ever said [expletive] about it."

This is one of a number of remarkable examples of the extreme survivability of bacteria and bacterial spores, which adds weight to the notion that microorganisms might be able to adapt to conditions on worlds seemingly much less hospitable than those on Earth.