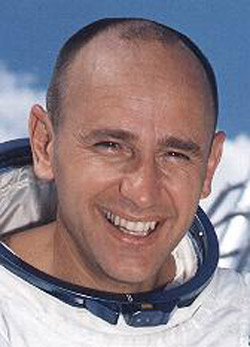 Alan Bean was an American astronaut who became the fourth human to walk on the Moon. He obtained a BS from the University of Texas, Austin, entered the United States Navy, and eventually became a Navy test pilot. He also developed an interest in art and, while serving as a test pilot, enrolled in night classes at a nearby college. In 1963, he was chosen by NASA to train as an astronaut and later appointed Lunar Module pilot aboard Apollo 12. In 1973, Bean again flew in space as commander of Skylab 2. This was to be his last space mission, although he was appointed as backup commander for the Apollo-Soyuz Test Project. Subsequently, he served as Chief of Operations and Training and Acting Chief Astronaut until the first flight of the Space Shuttle.

In 1981, Bean resigned from NASA to devote all his time to painting and speaking. His artwork of the Moon is unique in being the first to draw upon firsthand experience of another world.