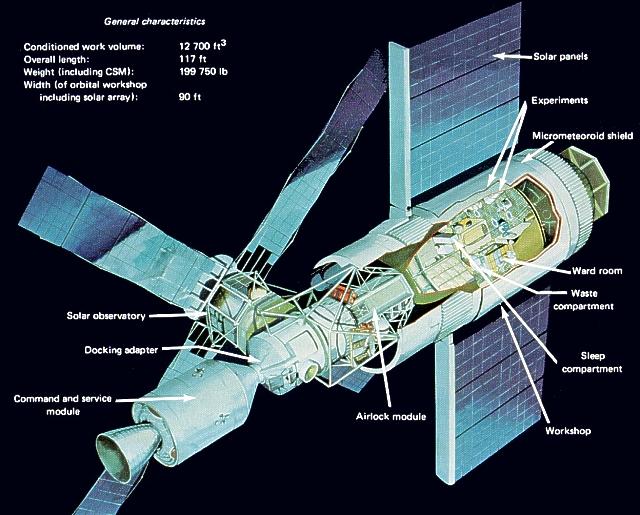 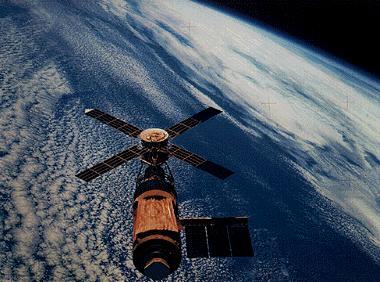 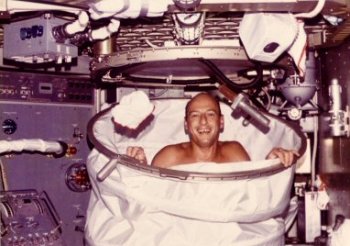 Conrad in the Skylab shower. 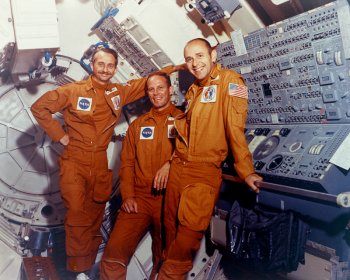 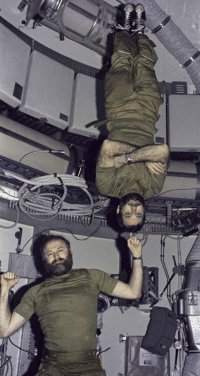 Skylab was an experimental American space station adapted from Apollo hardware. It consisted of the orbital workshop itself, an airlock module, a multiple docking adapter, and the Apollo telescope mount. In orbit, the station was 36 m long and, with a docked Apollo command and service module, had a mass of about 90.6 tons. The living volume was about the same as that of a small house. Because crews stayed for one, two, or three months, the orbital workshop was designed for habitability, with more amenities than previous spacecraft. Among the features especially appreciated by crews were a large window for viewing Earth, a galley and wardroom with a table for group meals, private sleeping quarters, and a shower, custom-designed for use in weightlessness.

Twin solar array wing panels were folded against the orbital workshop for launch, one on each side. When Skylab reached orbit, the arrays would extend, exposing solar cells to the Sun to produce 12 kW of power.

Skylab was equipped to observe Earth's natural resources and the environment, and activity on the Sun. Astronauts also studied the effects of long-term weightlessness on the human body and materials processing in microgravity, and performed experiments submitted by students for a "Classroom in Space." Because Skylab was a research laboratory, the composition of the crew differed from that of the Mercury, Gemini, and Apollo missions. Except for one scientist on the last Apollo mission, all previous crew members had been pilots. The Skylab crews included a number of scientist-astronauts.

The unmanned mission to place Skylab in orbit. During launch, on May 14, 1975, the micrometeoroid shield accidentally deployed too soon, jamming one solar array wing and damaging the other so badly that both the wing and the shield were ripped away. Left with only one solar array wing and no micrometeoroid shield, which also served as a shade to keep the interior of the space station cool, Skylab could have been rendered useless. However, thanks to clever engineering and improvisation, the effect of the damage was minimized, and planned Skylab operations were able to go ahead despite some reduction in power.

The first manned Skylab mission, devoted to starting up and checking out the space station, and most importantly, fixing the damage caused during the station's launch. With the temperature inside Skylab at a scorching 52°C, the astronauts' first priority was to set up a "parasol" shade as a makeshift replacement for the lost micrometeoroid shield. Once this had been deployed by reaching out of Skylab's main hatch, the temperature inside the station dropped to comfortable levels.

On the third day of the mission (MD-3), the crew began turning on experiments. Then, on MD-14, Conrad and Kerwin went on a crucial three-hour spacewalk to extend Skylab's only remaining solar array wing that was jammed by a strap of debris. Kerwin was able to cut through the debris using shelf-the-shelf barbed-wire snippers that NASA had bought for just $75. The success of this repair assured there would be enough power for the full 28-day mission and for the subsequent Skylab 3 and Skylab 4 missions. A couple of days before returning home, Conrad and Kerwin carried out another spacewalk to retrieve and replace film from the solar telescopes, repair a circuit breaker module, and do minor maintenance on experiment packages located outside the station.

Upon completion of the mission, the Skylab 2 crew briefly set a new manned spaceflight endurance record, previously held by cosmonauts Dobrovolsky, Volkov, and Patsayev on Salyut 1 in June 1971.

The second manned Skylab mission. Shortly after entering the space station, all three crewmembers fell victim to space-sickness, delaying the activation of onboard equipment.

On Mission Day-5, an apparent failure of two of the four thruster quadrants on the Command and Service Module (CSM) was detected. This not only threatened an early end to the mission but also put a question mark over whether the CSM would be able to return safely to Earth. Launch crews at Kennedy Space Center were put on a non-stop work schedule to prepare the Skylab 4 Saturn IB for a possible rescue operation. In the event, the mission was continued as planned and the CSM performed flawlessly during reentry. On August 6, 1973, Garriott and Lousma went on a 6-hr spacewalk to deploy a twin-pole thermal shield to replace the "parasol" installed by the Skylab 2 crew. Two further spacewalks followed for film retrieval and replacement, installation of a new rate gyro package, and routine maintenance.

The third and final manned visit to Skylab. Highlights of the record-setting 84-day mission included extensive photography and analysis of comet Kohoutek and the first complete photographic coverage of a solar flare from beginning to full size.

A total of 1,563 hr of scientific experiments were performed, about twice that of Skylab 2 and Skylab 3 combined. The crew also completed four spacewalks, lasting a total of 22 hr 22 min and including the longest spacewalk up to that time of 7 hr 1 min.

Before the Skylab 4 crew left, they boosted the space station to a slightly higher orbit which varied from 430 to 455 km. Calculations indicated this would enable Skylab to remain aloft for at least nine more years, giving NASA time to bring its Shuttle service on line and mount a rescue mission. NASA originally planned to use the fifth Shuttle flight, slated for the second half of 1979, to dock with Skylab and push it to a safe orbit so that it could be used again. But in late 1978, NOAA (National Oceanographic and Atmospheric Administration) warned that increased solar activity would result in a stronger solar wind that would likely push Skylab back into the atmosphere within a year. This, compounded with delays to the Shuttle program caused by engine development problems, meant that a rescue mission could not be launched in time. On December 15, 1978 NASA Administrator Robert Frosch informed President Carter that Skylab could not be saved, and that NASA would attempt to guide the space station to a controlled reentry as far away from populated areas as possible. At 3:45 am EDT on Jul 11, 1979, controllers at Johnson Space Center commanded Skylab to tumble, hoping the space station would disintegrate upon reentry. However, Skylab did not break apart as much as expected and, 21 hr later, rained large chunks of debris near Perth, Australia.

One golf course groundkeeper from Albany in Western Australia stumbled across a three-foot long, (0.9 m) 2 lb (0.9 kg) chunk of twisted metal from Skylab. The San Francisco Examiner offered £5,000 to the first person to deliver a piece of genuine debris to their office within 72 hr of splashdown. The Western Australian Government also put up a cash prize for space debris. Most of the pieces were found on a strip of land about 100 mi (160 km) wide between the Perth-Adelaide highway and the Indian Pacific railway line, which connects east and west Australia.

Since Skylab, mission controllers have brought down dozens of spacecraft and space stations but none as big, until the Russian space station, Mir, in 2001.