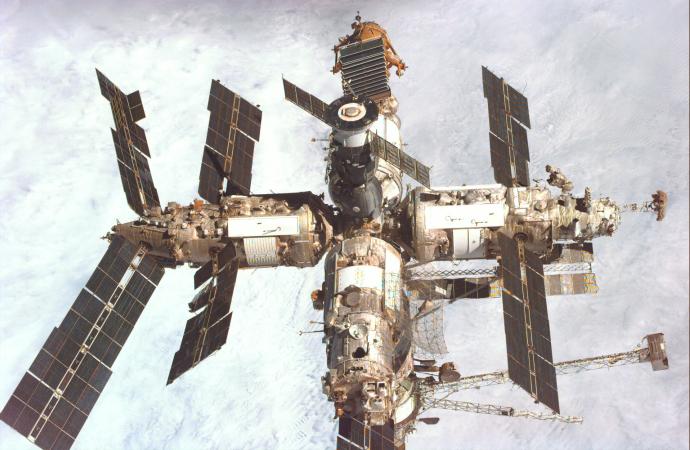 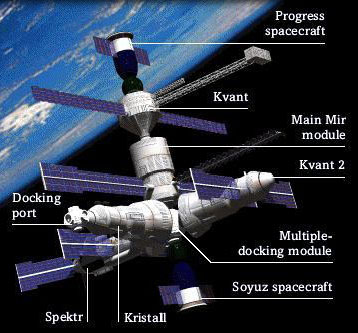 The components of Mir.

Mir was a large and long-lived Soviet/Russian space station, the first segment of which was launched in February 1986. Bigger than its predecessors, the Salyut series, and composed of several modules, Mir (Russian for 'Peace' or 'World') was designed to house more cosmonauts on longer stays than the Salyuts could support.

The core of Mir was the 'base block' living quarters, equipped with six docking ports to which visiting spacecraft and additional modules could be attached. Mir was gradually expanded by adding laboratory and equipment modules, rearranged for different missions and upgraded without abandoning the original core unit. It was almost continuously occupied for 13 years – with just a four-month break in 1989 – including the time during which the Soviet Union disintegrated. In 1995 Mir cosmonaut Valeri Polyakov set a new single-spaceflight endurance record of 439 days. The following modules were added to the base block: Kvant (in 1987 for astrophysics), Kvant 2 (in 1989 to provide more work space), Kristall (in 1990 for materials processing experiments and to provide a docking port for the Space Shuttle), Spektr (in 1995 for Earth and near-space observations), and Priroda (in 1996 to support microgravity research and remote sensing).

In 1993 and 1994 the heads of NASA and the Russian Space Agency, with government approval, signed historic agreements on cooperative ventures in space. The two agencies formed a partnership to develop the International Space Station and, in preparation for that project, to engage in a series of joint missions involving Mir and the Space Shuttle. The first docking mission of the Shuttle and Mir took place in 1995. Unlike the one-off Apollo-Soyuz Test Project of 1975, the Shuttle-Mir mission signaled an era of continuing cooperation between the United States and Russians in space.

Mir last years of service were markeed by numerous technical faults and failures, but these provided an opportunity to gain valuable experience. It is difficult to simulate such problems on Earth, and they taught astronauts and cosmonauts how to react in a highly stressful situation.

After 15 years of service and more than 86,000 orbits, Mir returned to Earth. Three de-orbit burns brought it into the atmosphere, although the final engine burn was evidently more effective than planned since Mir's plunge into the Pacific fell short of the target zone, treating people on a Fijian beach to an unexpected pyrotechnic display as glowing pieces of the space station streaked overhead.

One of Mir's science modules. Berthed opposite Kvant 2 , Kristall ("crystal") carried two stowable solar arrays, science and technology equipment, and a docking port equipped with a special androgynous docking mechanism designed to receive heavy (up to about 100-ton) spacecraft equipped with the same kind of docking unit. Kristall's main aim was to develop biological and materials production technologies in microgravity. The androgynous unit was originally developed for the Russian Buran Shuttle program. Atlantis used the androgynous docking unit on Kristall during mission STS-71.

Science module designed for Earth observations and berthed opposite Kvant 2. Spektr ('spectrum') was badly damaged on 25 June 1997, when Progress M-34, an unmanned supply vessel, crashed into it during tests of a new Progress guidance system. The module sustained a hole, lost pressure and electricity, and had to be shut down completely and sealed off from the remainder of the Mir complex. Its undamaged solar arrays were later reconnected to the station's power system by exterior cables attached by two spacewalking cosmonauts on a later stay. The cosmonauts also installed a plate over the interior hatch to Spektr, during a unique 'inside spacewalk.'

A microgravity and remote sensing module that included equipment for American, French, and German experiments; its name means "nature." Soon, after Priroda successfully reached orbit on 23 April 1996, a failure in its electrical supply system halved the amount of power available onboard. Since it had no solar panels, the module had only one attempt to dock with Mir, before loosing all its power and maneuverability. Given the fact that several previous modules had to abort their initial docking attempts, ground controllers were extremely nervous about the situation. Fortunately, the Priroda docking went flawlessly on 26 April 1996.