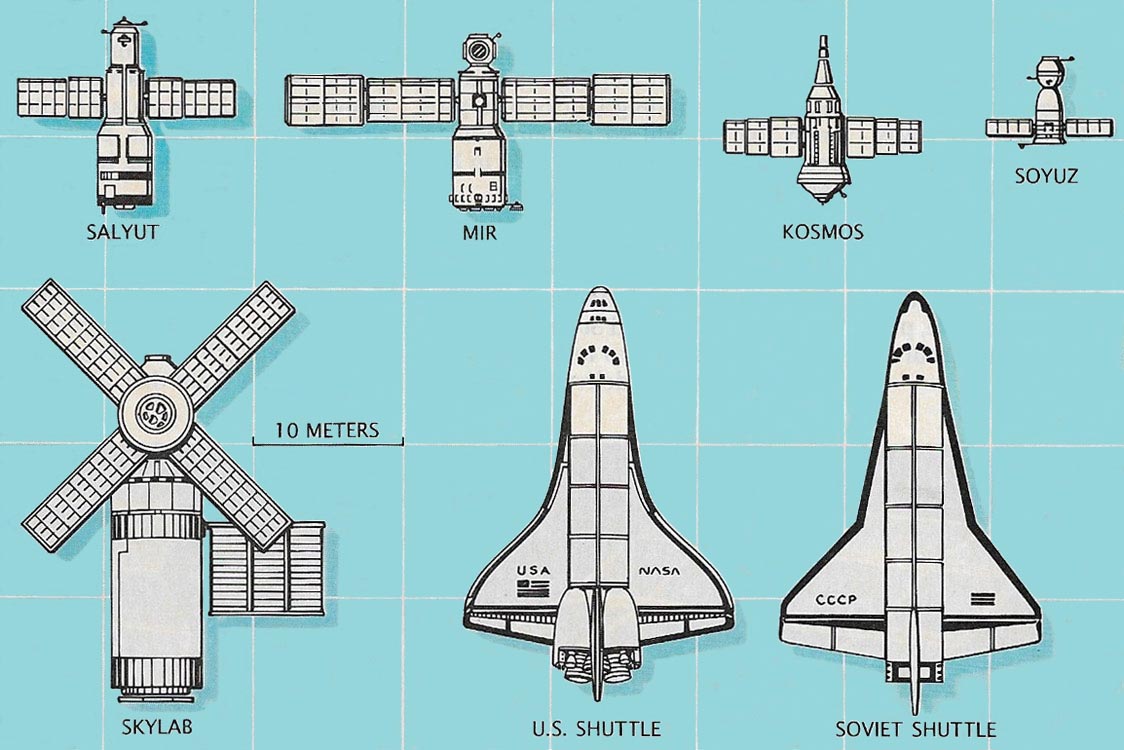 Comparison of the Soviet space stations Salyut and Mir with the U.S. Skylab and other spacecraft. 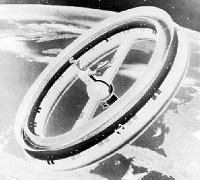 A space station is a large orbiting structure in which humans can live and work for extended periods. The concept goes back at least as far as a tale called "The Brick Moon," written by Edward Everett Hale just after the American Civil War. Konstantin Tsiolkovsky tackled the idea more technically in a 1895 science-fiction story, and in 1903 expanded his description to include rotation for artificial gravity, the use of solar energy, and even a space greenhouse with a closed ecosystem. In 1923, Hermann Oberth coined the term "space station" to describe an orbiting outpost that would serve as the starting point for flights to the Moon and Mars. Five years later, Guido von Pirquet considered a system of three stations – one in a near orbit, one more distant, and a transit station in an intermediate elliptical orbit to link the other two – which he suggested might serve as refueling depots for deep space flights. The notion of a rotating wheel-shaped station was introduced in 1929 by Herman Noordung in his Das Problem der Befahrung des Weltraums (The Problem of Space Flight). He called his 30-meter-diameter station "Wohnrad" (Living Wheel) and suggested it be placed in geostationary orbit.

In the 1950s, Wernher von Braun worked with Collier's magazine (see Collier's Space Program) and Walt Disney Studios to produce articles and documentaries on spaceflight. In them, he described an updated version of Noordung's wheel, enlarged to a diameter of 76 m and reached by reusable winged spacecraft. Von Braun saw the station as an Earth-observation post, laboratory, and a springboard for lunar and Mars excursions (see von Braun space station. Later in the same decade the dream slowly began to turn into reality. In 1959, a NASA committee recommended that a space station be established before a trip to the Moon, and the House of Representatives Space Committee declared a space station a logical follow-on to the Mercury Project. As it transpired, the Apollo lunar program preempted the goal of building an American space station in the early 1960s, although in 1969, the year Apollo 11 landed on the moon, NASA proposed a 100-person permanent space station to be completed by 1975. Known as Space Base, it was envisioned as a laboratory for scientific and industrial experiments and a home port for nuclear-powered tugs designed to carry people and supplies to an outpost on the Moon. NASA realized that the cost of resupplying a space station using expendable rockets would quickly exceed the station's construction cost. A reusable spacecraft – the Space Shuttle – was the obvious solution. The Shuttle would ferry up the people and the supplies needed for a long stay in space, and ferry back down people and the industrial products and experiment samples they made on the station. But economic and political priorities shifted during the Apollo era and, despite Apollo's success, NASA's annual budgets suffered dramatic cuts beginning in the mid-1960s. Because of this, plans for a permanent space station were deferred until after the Shuttle was flying.

Meanwhile, the Soviets, having lost the race to the Moon, focused instead on setting up a permanent human presence in orbit. Throughout the 1970s they launched a series of small, pioneering Salyut space stations and then, in 1986, began assembly of the multi-module Mir. NASA's deferred post-Apollo station efforts to the 1980s with the notable exception of Skylab. When the last Skylab crew headed home in February 1974, NASA proposed sending a Shuttle to boost the station – a converted Saturn V third stage – to a higher orbit and even refurbishing it for further use. However delays to the Shuttle program combined with greater-than-expected solar activity (which expanded Earth's atmosphere) hastened Skylab's fall from orbit.

In response to budgetary pressures and the magnitude of the task of building a large permanent space station, NASA began to explore the possibility of international cooperation. American and Soviet negotiators discussed joint Shuttle-Salyut missions as an outgrowth of the first manned American-Russian space effort, the Apollo-Soyuz Test Project in 1975. NASA offered the Shuttle for carrying crews and cargo to and from Salyut and in return hoped to conduct long-term research on board the Russian station until it could build its own. But these efforts ended with the collapse of East-West detente in 1979. Better progress was made on other fronts, and in 1973 Europe agreed to supply NASA with Spacelab modules – mini-labs that would ride in the Shuttle's payload bay. When the Shuttle flew for the first time in 1981, a permanently-manned space station was once again touted as the next logical step fro the United States in space. Budgetary, programmatic, and political pressures, would all hinder this ambition, but by 1997 the orbital assembly of the International Space Station had begun.