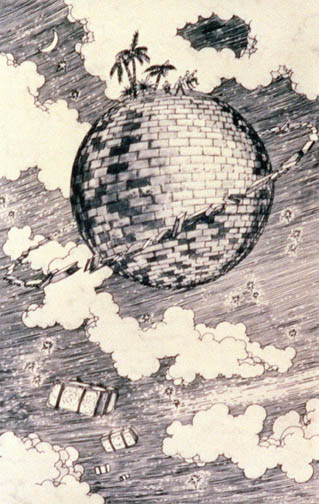 Edward Hale was a prolific American writer, contributing editor to Atlantic Monthly, and almost certainly the only science-fiction writer to serve as chaplain to the US senate. He appears to have been the first to describe an artificial Earth satellite.

Hale's short story "The Brick Moon" (1869) and its sequel "Life on the Brick Moon", both published in Atlantic Monthly, tell of a 200-ft (60-m) diameter sphere (built of bricks to "stand fire, very, very well") that is due to be launched into an orbit 4,000 mi (6,400 km) high. Since its purpose is to provide a longitude fix for navigators who will see it from the ground as a bright star, Hale reasons correctly that a polar orbit is needed. In effect, the Brick Moon will move around a giant Greenwich meridian in the sky, fulfilling the same role for the measurement of longitude as the Pole Star does for latitude. Two huge, spinning flywheels are set up to throw the artificial moon into its correct orbital path. But something goes wrong. The brick sphere rolls prematurely down "upon those angry flywheels, and in an instant, with all our friends [those building the moon and their visiting families], it had been hurled into the sky!"

Later, a German astronomer spots the new moon in orbit, complete with its marooned and unscheduled inhabitants – apparently adapting well to their new life. Hale therefore manages to portray not only the first artificial satellite but also the first space colony.

Hale also wrote one of the first stories of alternate worlds, "Hands off" (Harpers, 1881), which was reprinted in Fantasy and Science Fiction in 1952. "The Good-Natured Pendulum" was reprinted in Amazing Stories in 1933. Hale was the grandnephew of Revolutionary War patriot Nathan Hale, and is best known for his patriotic prose and poetry, including the story "The Man without a Country (1863).