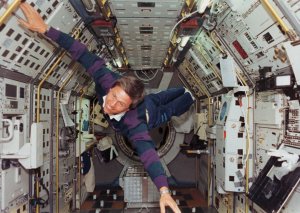 Spacelab was a modular, reusable scientific laboratory, built by the European Space Agency (ESA), and carried into orbit on numerous missions between 1983 and 1998, by the Space Shuttle. Scientists from about a dozen nations used it to conduct research on a wide variety of subjects under conditions of microgravity. Spacelab consisted of an enclosed pressurized module, where the crewed work, and smaller unpressurized pallets. The latter carried telescopes and other instruments that required direct exposure to space or did not need a human operator. Some Spacelab missions were dedicated to particular field, such as life sciences, materials science, astronomy, or Earth observation, while others were multidisciplinary.

Spacelab has several components that can be connected and installed inside a Space Shuttle. The different components are arranged and mounted inside the Shuttle to meet the needs of a specific Spacelab mission. The pressurized module is a habitable shirt-sleeved environment for astronauts. The pressurized module has several configurations which can include a core module and an experiment module. The pallet provides a platform for instruments needing exposure to the rigors of outer space. Two pallets can be flown with the long module and three with the short module. The pallets can also be flown in a pallet-only configuration. Auxilary equipment for Spacelab include the tunnel, Igloo, and the Instrument Pointing System (IPS).

The pressurized module is a laboratory where astronauts perform experiments while in space. It provides them with the opportunity to adjust their procedures based on the results they are observing. The module can be built with either one segement (core) or with two segments (core and experiment). When both segments are used, the module's outside length, with end cones, is 23 ft. The module is attached to the orbiter payload bay with 4 attach fittings, 3 longeron fitting sets and one keel fitting. It is covered with thermal control insulation. The segments were designed to be reused for up to 50 missions. Inside the module, laboratory equipment is mounted in racks and other areas. Handrails are mounted on the racks, overhead, and end cones. Foot restraints are also provided on the floor and on rack platforms. Crew objects can be temporarily fastened to velcro patches located throughout the module.

The pallets are U-shaped platforms for mounting instrumentation, large instruments, experiments requiring exposure to space, and instruments requiring a large field of view, such as telescopes. The pallet has hard points for mounting heavy equipment. Each pallet can hold up to 3 tons if the weight is evenly distributed. Each pallet is connected to the payload bay with 5 attach points. When multiple pallets (up to 5) are being used, a rigid structure known as a "pallet train" is built. The pallets are connected with 12 joints. Each pallet is 13 ft wide and 10 ft long.

The Spacelab transfer tunnel provides the scientists a pressurized passageway into the Spacelab module from the orbiter crew cabin where they eat and sleep. Due to center of gravity considerations, the module can not be placed at the forward end of the payload bay. The tunnel is cylindrical, with an inside diameter of 40 inches. It has two sections that can be used to adjust the length of the tunnel. The long section is 18.88 ft. The short section is 8.72 ft. Because of the 42.1 inch difference in the middeck and the center of the module direct access to the Spacelab module is impossible. The joggle section compenstates for the difference in levels. The joggle section is also where the tunnel air ventilation and negative pressure regulation system are placed. These systems provide the tunnel with the same atmospheric conditions as the module.

On module missions, the Spacelab subsystems are handled in the core segment. A pressurized, temperature controlled housing, called the igloo, was developed to hold these subsystems when a pallet-only mission is flown. The igloo provides the connections for data gathering, communications, electrical power, and cooling equipment. Vertically attached to the forward end of the first pallet, the igloo is 7.9 ft high and 3.6 ft in diameter.

Precision pointing is very important for Spacelab experiments that need to be pointed at targets, such as the Sun, Earth, and stars. This need can not always be met by the orbiter, since it can rarely maintain an accuracy better than one-tenth of a degree, and often it only is capable of 2 degrees of accuracy. The Instrument Pointing System (IPS) was specifically designed by the European Space Agency to provide 2 arcsec of accuracy and +/-1.2 arcsec for many different kinds of payloads; such as a single large instrument or a cluster of smaller instruments. The IPS can calculate where it needs to go independent of the orbiter. It can hold even if the orbiter is moving under it. The IPS is mounted in a pallet in the orbiter payload bay. It is controlled from either the aft flight deck of the orbiter, the Spacelab module, or from the ground. The optical sensor package on the IPS is used to configure the IPS to view the Sun, Earth, or stars. It searches and finds guide stars, locking on to them and holding the IPS at a certain position. Predetermined guide stars are compared to what it sees to determine if the correct position is found.