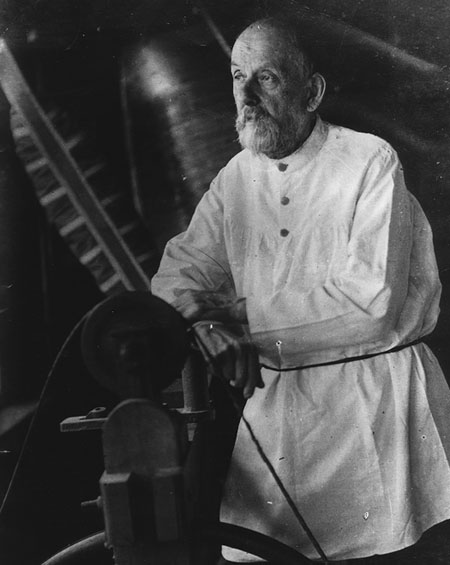 Konstantin Tsiolkovsky was a schoolmaster – shy and partially deaf, but long before the Wright brothers flew the first plane, he anticipated spaceflight. 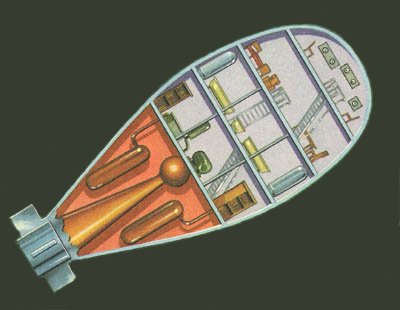 Tsiolkovsky design for a manned spacecraft.

Konstantin Tsiolkovsky was a Russian physicist and school teacher, regarded as the founder of modern rocket theory. Born in the small town of Izhevskoye exactly 100 years before his country placed the world's first artificial satellite in orbit (the launch of Sputnik 1 was timed to commemorate his birth), Tsiolkovsky developed the mathematics of rocketry and pioneered a number of ideas crucial to space travel including that of multistage launch vehicles. He later recalled:

For a long time I thought of the rocket as everybody else did – just as a means of diversion and of petty everyday uses. I do not remember exactly what prompted me to make calculations of its motions. Probably the first seeds of the idea were sown by that great fantastic author Jules Verne – he directed my thought along certain channels, then came a desire, and after that, the work of the mind.

At age nine, Tsiolkovsky went deaf following a bout of scarlet fever, an event that prevented him from attending school but led him to become an avid reader. An early interest in flight and model balloons was encouraged by his parents. His mother died when he was 13 and his father was poor, but he taught himself mathematics, and went to technical college in Moscow. There he found an enlightened mentor named Nikolai Fyodorov (whose admirers were said to include Tolstoy, Dostoyevsky, and Leonid Pasternak, Boris' father). Fyodorov tutored the young Tsiolkovsky in the library daily for some three years, introducing him to books on mathematics and science and discoursing with him on the philosophical imperative leading humankind towards space exploration.

In 1878, Tsiolkovsky became a math teacher in Kaluga, two hours south of the capital. Although he carried out some experiments with steam engines, pumps, and fans in his home laboratory and built one of the first wind tunnels (c. 1892), his strength lay in theoretical work. "It was calculation that directed my thought and my imagination," he wrote.


The science of rockets

Tsiolkovsky produced some of the earliest scientific literature on spaceflight, including the classic work Exploration of Space by Means of Reactive Apparatus (1896). In 1898 he derived the basic formula that determines how rockets perform – the rocket equation. This formula was first published in 1903, a few months before the Wright brothers' historic manned flight. It appeared, together with many other of Tsilokovsky's seminal ideas on spaceflight, in an article called "Investigating Space with Rocket Devices," in the Russian journal Nauchnoye Obozreniye (Science Review). Unfortunately, the same issue also ran a political revolutionary piece that led to its confiscation by the Tsarist authorities. Since none of Tsiolkovsky's subsequent writings were widely circulated at the time (he paid for their publication himself out of his meager teacher's wage), it was many years before news of his work spread to the West.

The 1903 article also discussed different combinations of rocket propellants and how they could be used to power a manned spacecraft:

Visualize ... an elongated metal chamber ... designed to protect not only the various physical instruments but also a human pilot... The chamber is partly occupied by a large store of substances which, on being mixed, immediately form an explosive mass. This mixture, on exploding in a controlled and fairly uniform manner at a chosen point, flows in the form of hot gases through tubes with flared ends, shaped like a cornucopia or a trumpet. These tubes are arranged lengthwise along the walls of the chamber. At the narrow end of the tube the explosives are mixed: this is where the dense, burning gases are obtained. After undergoing intensive rarefaction and cooling, the gases explode outward into space at a tremendous relative velocity at the other, flared end of the tube. Clearly, under definite conditions, such a projectile will ascend like a rocket...

One of the propellant combinations that Tsiolkovsky favored, used commonly today in launch vehicles, was liquid hydrogen and liquid oxygen because it produces a particularly high exhaust velocity. This factor, the rocket equation reveals, helps determine the maximum speed that a spacecraft of given mass can reach. There was the problem of converting hydrogen, especially, into liquid; yet, to begin with, Tsiolkovsky brushed this aside. He did note, however, that: "The hydrogen may be replaced by a liquid or condensed hydrocarbon; for example, acetylene or petroleum."

His rocket equation led him to another important realization:

If a single-stage rocket is to attain cosmic velocity it must carry an immense store of fuel. Thus, to reach the first cosmic velocity [his term for the speed needed to enter Earth orbit], 8 km/s, the weight of fuel must exceed that of the whole rocket (payload included) by at least four times... The stage principle, on the other hand, enables us either to obtain high cosmic velocities, or to employ comparatively small amounts of propellant components.

The concept of the multistage rocket had been known to firework-makers for at least two centuries. But Tsiolkovsky was the first to analyze it in depth, and he concluded that it was the only feasible way of enabling a spacecraft to escape from the Earth's gravity.


Journey to the cosmos

Having solved in principle many of the physical problems of space flight, Tsiolkovsky turned to the biological difficulties. He proposed immersing astronauts in water to reduce the effects of acceleration at takeoff, and cultivating plants onboard spacecraft to recycle oxygen and provide food. He wrote about space suits, zero-g showers, utilizing solar energy, and colonizing the solar system.

He also wrote extensively and far ahead of his time on the possibility of life on other worlds. Some extraterrestrial life-forms, he proposed, might consist entirely of hydrogen (like the intelligent nebula in Fred Hoyle's The Black Cloud). Tsiolkovsky also wondered if there might be beings so advanced that they were essentially a disembodied consciousness. In his Monism of the Universe (1925), he suggests that superior entities might systematically eliminate lower creatures, such as animals and bacteria, rather than have them endure the painful process of biological evolution. Furthermore, he argued that somewhere a race had progressed technologically to the point at which it could "overcome the force of gravity and ... colonize the Universe." Although he believed interstellar travel was achievable, he argued in a letter to the Organization of Young Technicians (1920) that, "In the near future short radio waves will penetrate our atmosphere and ... be the main means of stellar communication," thus presaging the science of SETI.

In Russia, Tsiolkovsky's writings had a powerful influence on Valentin Glushko, Sergei Korolev, Igor Merkulov, Alexander Polyarny, and others, who would lay the foundations for the Soviet space program. In the West, his work was virtually unknown until the 1930s by which time practical rocketry had developed independently through the efforts of men like Hermann Oberth in Germany and Robert Goddard in the United States.

After the Bolshevik revolution of 1917 and the creation of the Soviet Union, Tsiolkovsky was formally recognized for his accomplishments and, in 1921, received a lifetime pension from the state that allowed him to retire from teaching and devote himself fully to his studies. Appropriately, for a man who remained largely unrecognized during life, his greatest monument is normally invisible to human eyes – the giant crater Tsiolkovsky on the far side of the Moon.