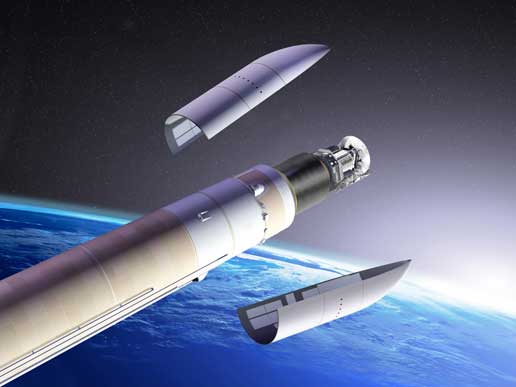 Fig 2. Artist's impression of fairing separating from an Ariane 5 rocket as it carries the Herschel and Planck observatories into space.

Fig 3. The ranges of specific impulse and thrust for different types of propulsion system.

A boat-tail is the transition section at the tail of a rocket (or other vehicle) that gradually narrows the body down to the motor diameter. It thereby helps reduce base drag.

A boilerplate is a piece of test hardware, generally non-functioning, which simulates weight, center of gravity, and aerodynamic configuration, and may incorporate interim structural shells or dummy structures. Internal systems may be inert or have some working subsystems to obtain flight data for use in development.

A boost glider is a winged aircraft that is powered into flight by a rocket motor, then returns to the ground as a glider after ejecting its motor or motor assembly.

The boost phase is the part of a rocket's flight in which the propellant is generating thrust.

A booster, also known as a booster rocket, is the name given to any of three different components of a launch vehicle: (1) A stage of a launch system (see staging) used to provide an initial thrust greater than the total liftoff weight. (2) A rocket engine, either solid- or liquid-fueled, which assists the normal propulsive system or sustainer engine of a rocket or aeronautical vehicle in some phase of its flight. (3) A rocket used to set a launch vehicle in motion before another engine takes over. A booster assembly is a structure that supports one or more booster rockets.

Characteristic velocity may mean either of the following:

1. The change of velocity needed to carry out a space maneuver, such as on orbital transfer.

2. The sum of all the velocity changes that a spacecraft must achieve in the course of a mission – a quantity related to the amount of fuel which must carried.

Exhaust velocity is the average actual velocity at which exhaust material leaves the nozzle of a rocket engine. In practice, this differs from the effective exhaust velocity which takes into account other factors and is more useful for calculating quantities such as thrust.

A fairing is a section of aircraft surface, or an attached structure, designed to reduce drag. For example, the contoured sheet metal where a wing meets the fuselage.

A fairing is also the area of a launch vehicle where a payload is attached until it is released into orbit (Fig 2).

A gaseous-propellant rocket engine is a small rocket engine that works by expelling a gas, such as nitrogen or helium, stored in (relatively heavy) tanks at high pressure. Cold gas engines were used on many early spacecraft as attitude control systems and are still occasionally used for this purpose. Warm gas engines achieve better performance by heating the propellant, electrically or chemically, before expulsion.

Ideal burning occurs when a solid propellant burns in such a way that the thrust produced by the rocket motor and the pressure of combustion remain constant throughout the burn period.

A ideal rocket is a hypothetical rocket engine that satisfies a number of assumptions which make carrying out calculations on rocket performance much easier. Among these assumptions are that the propellant flow is completely steady, that all the reactants and products are perfectly evenly mixed, that no heat escapes through the rocket walls, and that all processes are frictionless. Although these are idealizations and simplifications they are good enough for many purposes. For example, the measured actual performance of a chemical rocket propulsion system is typically only 1–6% below that predicted for the ideal case.

A liquid-fueled rocket is a rocket that derives its thrust from one or more liquid-propellant rocket engines.

A picket ship is an oceangoing ship used on a missile range to provide additional instrumentation for tracking or recovering missiles.

The pogo effect consists of unstable, longitudinal (up and down) oscillations induced in a launch system, mainly due to fuel sloshing and engine vibration (see chuffing). These oscillations can lead to variations in the propellant flow rate, which in turn can cause the thrust from the affected engines to fluctuate several times a second. Periodic fluctuations in thrust occur in all rocket engines, but normally the mass of the rocket is sufficient to keep it from becoming noticeable or dangerous. However, when the thrust fluctuation approaches the resonant frequency of the rocket structure, the forces couple and the result is the sense that the rocket is surging backward and forward along its length several times a second. This motion resembles that of a pogo stick, hence the name.

The pressure limit is either the upper and lower limit of pressure within which a solid-propellant rocket motor delivers optimum performance.

In solid-propellant rocket motors, progressive burning is the burning of the fuel such that the chamber pressure steadily rises throughout the burn time, thus delivering steadily increasing thrust.

A reaction engine is an engine such as a rocket or jet that propels the vehicle to which it is attached by expelling reaction mass.

Reaction mass is any material expelled by a rocket to provide thrust.

Regenerative cooling is the cooling of part of a rocket engine by the propellant.

A regeneratively-cooled engine is one in which the fuel or oxidizer, or both, is circulated around the combustion chamber or nozzle. The technique was initially developed by James Wyld and Harry Bull.

where v is the maximum velocity of the rocket in gravity-free, drag-free flight, ve is the effective exhaust velocity, ln is the natural logarithm, mi is the initial or total rocket mass, and mf is the final or empty rocket mass (mi/mf is the payload ratio).

A rocket plane is an aircraft that uses one or more rocket engines for propulsion, possibly in addition to jet engines. Rocket planes are able to reach much higher speeds than similarly-sized jet aircraft, but for much shorter periods of operation, typically only a few minutes. Because of the expense and the various practical difficulties of operating rocket engines, rocket planes are not suitable for most aviation needs, and so are invariably specialised, mostly experimental, aircraft.

The first rocket-powered aircraft was the Lippisch Ente, flown in 1928. The only rocket plane ever to be mass-produced was the Messerschmitt Me 163 in 1944, one of several German World War II attempts at rocket-powered aircraft. The Soviets, too, were experimenting with similar technology around this time in the form of the BI-1 and RP-318. The first truly successful rocket plane was the North American X-15, which was used for several years and eventually broke Mach 6.0. The development of SpaceShipOne, first flown in 2003, suggests that rocket planes may soon evolve to become true spaceplanes, capable of orbital and other extended missions beyond Earth's atmosphere.

Staged-in-orbit is a boost trajectory similar to the restart except that the stage burnout and separation occur simultaneously with the parking orbit condition. Continuation to other trajectories would be accomplished by ignition of another stage.

A static firing is the firing of a rocket motor, rocket engine, or an entire stage in a hold-down position to measure thrust and carry out other tests.

Static testing is the testing of a device in a stationary or held-down position as a means of testing and measuring its dynamic reactions.

Stay time is the average time spent by a gas molecule in a liquid-propellant rocket engine's combustion chamber before exiting from the nozzle and producing thrust.

The step principle is a design feature of rockets in which one stage is mounted directly onto another (see staging). When a lower stage is used up, it is ejected, and the next upper stage takes over. With each stage's ejection the weight of the spacecraft decreases, so the next stage has less work to do.

A thrust equalizer is a safety device that prevents motion of a spacecraft if its solid-fuel rocket motor ignites accidentally. The device is usually a vent at the top of the thrust chamber that is left open until launch time. If the fuel ignites accidentally before launch, the gases of combustion will blow out from both the top and bottom of the motor, thus equalizing thrust on both sides and preventing the spacecraft from launching prematurely.

In solid-propellant rocket motors, unrestricted burn is achieved by boring a hole in the fuel along the motor's longitudinal axis, so that the entire length of the fuel chamber burns simultaneously. This method of burning produces a great amount of thrust for a short time.