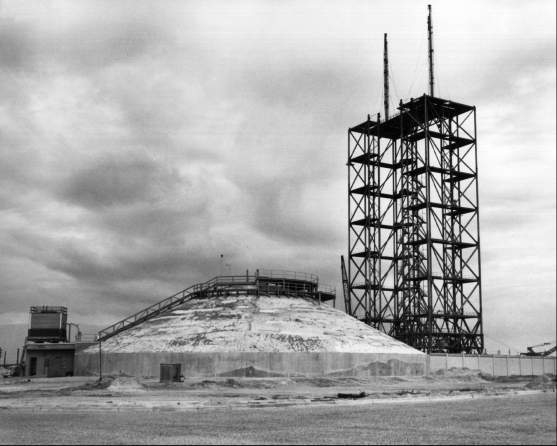 Fig 1, The blockhouse at Cape Canaveral Launch Complex 34 (LC-34), with the service structure rising behind it, Nov 1960. Credit: NASA.

An air start is the ignition of any rocket motor or engine after first motion of the vehicle. Upper stage ignition of a multistage rocket is a special case of air starting. Usually it involves the starting of strap-on boosters after a central motor has lifted the vehicle, or visa versa.

A blockhouse is a heavily reinforced building, designed to withstand blast and heat, which, in the early years of space exploration, contained the electronic controls and equipment for preparing and launching a rocket (Fig 1).

Blowdown is the draining of a rocket engine's liquid propellants. Blowdown may be done before or after firing the engine.

Blowoff is the separation of a portion of a rocket or spacecraft by explosive force. The Solid Rocket Boosters of the Space Shuttle, for example, were separated by blowoff.

Boiloff is the vapor loss from a volatile liquid – for example, liquid oxygen – particularly when stored in a vehicle ready for flight.

Burnout is the point on the trajectory of a rocket at which the fuel supply is exhausted or cut off. In solid fuel rockets (see solid-propellant rocket motor), controlled burnout is achieved by lowering the pressure in the combustion chamber or by opening vents to drop the temperature below the combustion point. In liquid fuel rockets (see liquid-propellant engines) the fuel supply is simply turned off.

Command destruct is a system that destroys a launch vehicle, activated on command of the range safety officer whenever vehicle performance degrades enough to be a safety hazard. The destruction involves sending out a radio signal that detonates an explosive in the rocket or missile.

A countdown is the step-by-step process leading to a launch. It runs according to a prearranged schedule, measured in terms of T-time (T minus time before the engine start sequence begins and T plus time thereafter). T-0:00:00 is not necessarily the liftoff point, however; the Space Shuttle, for example, typically lifts off at T+0:00:03.

Cutoff is the termination of burning in a jet or rocket engine brought about by an intentional command; also known as shutdown. It is distinct from burnout, which signifies the end of burning because of the exhaustion of fuel.

A dawn rocket is a rocket launched into orbit in an easterly direction so that Earth's rotation augments the rocket's velocity. Most launches are of this type.

A deluge collection pond is a pond at a launch site that collects water used to cool the blast deflector (see flame bucket).

A flame bucket is a deep cavity built into a launch pad to receive hot gases during rocket thrust buildup. It is open at the top and also on one or three sides below, with a thick metal fourth side bent toward the open sides so as to deflect the exhausting gases.

In a vertical launch, a flame deflector is any of variously designed obstructions that intercept the hot gases of the rocket engine so as to deflect them away from the ground or from a structure. The flame deflector may be a relatively small device fixed to the top surface of the launch pad surrounded by the framework of the launcher, or it may be a heavily constructed piece of metal mounted as a side and bottom of a flame bucket. In the latter case, the deflector may be perforated with numerous holes connected with a source of water, bending at an angle of about 45° into the line of the exhaust stream. During thrust buildup and the beginning of the launch, a deluge of water pours from the holes in such a deflector to keep it from melting.

In a captive test, a flame deflector is an elbow in the exhaust conduit or flame bucket that deflects the flame into the open.

"Go, no-go" is also a term used in production and inspection and testing of components and systems for conformance to certain criteria such as diameter of a pin or a hole. Go no-go gauges are common devices in production areas where mechanical parts are produced for example. Even mundane things like pellets and gravel are sorted by a series of so-called go no-go screens.

In a restricted sense, a launch pad is the load-bearing base or platform from which a rocket vehicle is launched. This is sometimes called the launch pedestal. More generally, a launch pad is the area from which a rocket vehicle is fired, including all the necessary support facilities, such as the service tower, safety equipment, and cooling water and flame detectors. Often called simply a pad.

MECO (main engine cutoff) is the time at which the main engines of a launch vehicle, or launch vehicle stage, are commanded to stop firing. MECO typically involves a sequence of events, including throttling back the engines before actual cutoff. For example, the MECO sequence for the Space Shuttle began about 10 sec before cutoff. About three seconds later, the Space Shuttle Main Engines (SSMEs) were commanded to begin throttling back at intervals of 10% thrust per second until they reached a thrust of 65% of rated power, called minimum power. Minimum power was maintained for just under 7 sec, then the SSMEs shut down.

Staging is the jettisoning of self-contained propulsion units, known as stages, after consumption of their propellants.