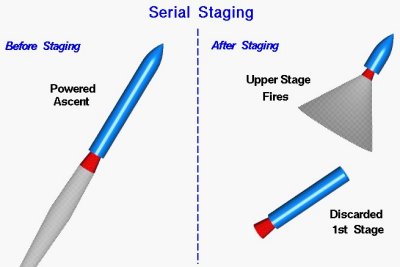 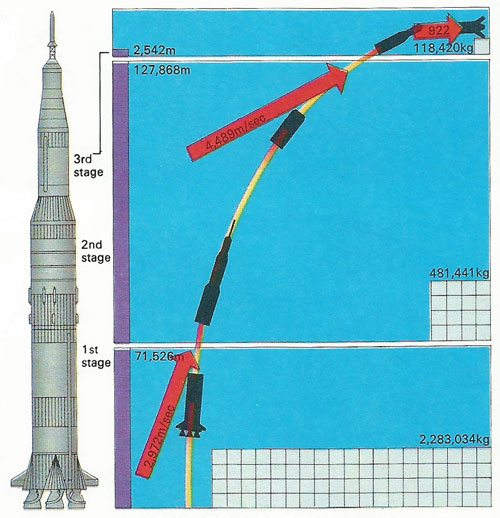 Fig 2. Serial staging of the Saturn V. At the start of the flight the large, lower stage is used; here it accounts for 83.3% of the propellant but accelerates the rocket to only 33% of its final velocity. When it has used up its fuel, it drops away and the second stage takes over. Only the third stage goes into orbit. 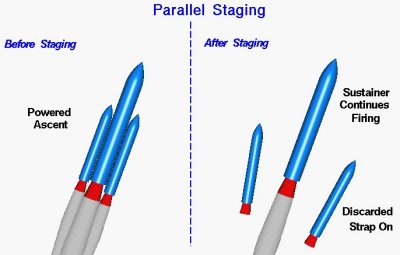 Staging is the jettisoning of self-contained propulsion units, known as stages, after consumption of their propellants – a crucial technique for improving the mass ratio of space transport systems not using an environmental engine. Among the earliest pioneers of the idea appear to have been Conrad Haas and Johan Schmidlap in the sixteenth century. However, the first detailed theoretical analysis of staging was done by Konstantin Tsiolkovsky.

Serial staging was used, for example, on the Saturn V moon rockets (see Figure 2). The Saturn V was a three stage rocket, which performed two staging maneuvers on its way to earth orbit. The discarded stages of the Saturn V were never retrieved.

In parallel staging, several small first stages are strapped onto to a central sustainer rocket (Fig 3). At launch, all of the engines are ignited. When the propellants in the strap-on's are extinguished, the strap-on rockets are discarded. The sustainer engine continues burning and the payload is carried atop the sustainer rocket into orbit. Parallel staging is used on the Space Shuttle. The discarded solid rocket boosters are retrieved from the ocean, re-filled with propellant, and used again on the Shuttle.

Some launchers, like the Titan III's and Delta II's, use both serial and parallel staging. The Titan III has a liquid-powered, two-stage Titan II for a sustainer and two solid rocket strap-ons at launch. After the solids are discarded, the sustainer engine of the Titan II burns until its fuel is exhausted. Then the second stage of the Titan II is burned, carrying the payload to orbit. The Titan III is another example of a three-stage rocket.

The zero stage is the common name given to a cluster of strap-on boosters that provides thrust additional to that of a sustainer engine, to a spacecraft during ascent into orbit.