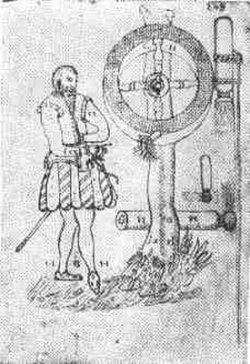 Conrad Haas was an Austrian artillery officer who may have been the first to describe the principle of the multistage rocket (see staging). The evidence comes from a 450-page manuscript in the national archive of Sibiu, Romania (formerly Hermannstadt), dealing with problems of artillery and ballistics, the third part of which was written by Haas.

Born in Dornbach, near Vienna, Haas served as an artillery guard and commissioned officer of the Imperial court and, in this function it seems, came in 1551 with Imperial troops to Transylvania and became chief of the artillery camp of the arsenal of Hermannstadt. Between 1529 and 1569 he wrote the above work which describes and depicts rockets with two and three stages, stabilizing fins, and the use liquid fuel.