Fig 1. The principle of the rocket. 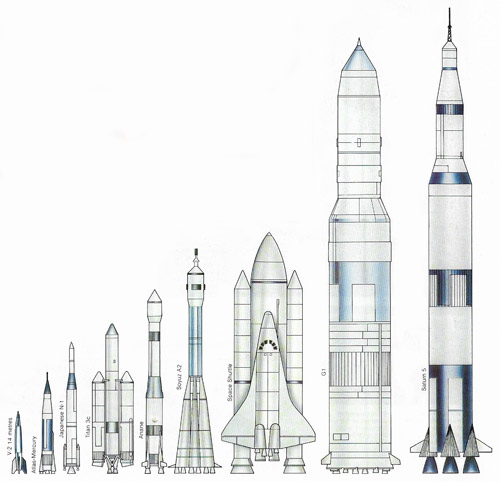 A rocket is a projectile driven by reaction (jet) propulsion that carries its own propellants. A rocket is therefore independent of Earth's atmosphere in terms of both thrust and oxidizer. In addition to their chief use to power space vehicles and missiles, rockets are also used for supersonic and assisted take-off airplane propulsion, and sounding rockets are used for scientific investigation of the upper atmosphere.

The first rockets – of the firework type, cardboard tubes containing gunpowder – were made in 13th-century China, and the idea quickly spread to the West. Their military use was limited, guns being superior, until they were developed by William Congreve. Later Congreve rockets mounted the guide stick alongside the central axis; and William Hale eliminated it altogether, placing curved vanes in the exhaust stream, thus stabilizing the rocket's motion by causing it to rotate on its axis.

The 20th century saw the introduction of new fuels and oxidants, for example, a mixture of nitrocellulose and nitroglycerin for solid-fuel rockets, or ethanol and liquid oxygen for the more efficient liquid-fuel rockets. The first liquid fuel rocket (see liquid-propellant rocket engine) was made by Robert Goddard who also invented the practical multistage. In World War II Germany, and afterward in the United States, Wernher von Braun made vast improvements in rocket design. Other propulsion methods, such as ion propulsion, have been developed.


Principle of the rocket

All rockets exploit Newton's third law of motion, namely, that action and reaction are equal and opposite. To appreciate the physics involved, imagine standing on a sledge on a frozen pond with a pile of 10 large pebbles on board, each with a mass of one kilogram. Suppose the total mass of you, the sledge, and the pebbles is 90 kg and that there is absolutely no friction between the sledge and the ice. You pick up one of the pebbles and throw it from the back of the sledge at a speed of 10 m/s. According to Newton's third law, as the pebble shoots off in one direction the sledge and its payload (you and the remaining pebbles) must move in the opposite direction. Because the sledge plus payload now has a mass of 89 kg, the speed it acquires will be 1/89th that of the ejected pebble, or 11.24 cm/s. In real life, the sledge would immediately begin to slow down and eventually come to a halt because of friction between the sledge's runners and the ice. But since we have assumed zero friction, the sledge carries on moving at whatever speed it has acquired. You now hurl another pebble overboard exactly as before. The sledge plus payload gains another increment of speed, but this time a marginally greater one than before because its overall mass has dropped by one kg. The speed increase is 1/88 times 10 m/s, or 11.36 cm/s, so that the total speed is 22.60 cm/s. After all 10 pebbles have been thrown overboard the speed of you and the sledge has climbed to 118.47 cm/s. This is the final speed since nothing remains to be jettisoned.

Ignoring the effects of friction may seem unfair. But, on the contrary, it makes our example closer to the case of a real rocket since friction-free conditions prevail in space. In fact, it is the absence of friction which dictates that rockets are the only means of space propulsion available, at least for the foreseeable future. A common mistake is to assume that rockets work by pushing against something, just as we move by pushing our feet against the ground, making use of the frictional force between two surfaces. But in space there is nothing to push against.

Our example of the sledge and pebbles also points out one of the biggest problems in spaceflight. This is the need for a rocket to carry its own reaction mass – the mass it has to expel in order to gain speed. In the case of a jet aircraft, for example, which also works by the principle of action and reaction, new reaction mass is continually obtained from the surrounding air. A jet engine takes in air as it moves along (aided, especially at low speeds, by fast-spinning turbine blades), heats and compresses this air by using it to burn propellant, and then allows the resulting exhaust gases to expand and escape as high-speed reaction mass at the rear. A rocket cannot do this. It must, with the interesting exception of the interstellar ramjet, be completely self-contained and have all of its reaction mass onboard from the outset. Unlike with an aircraft, this reaction mass also doubles as the propellant – the mixture of fuel and oxidizer which is burned in the combustion chamber of the rocket to release energy. The resulting hot exhaust gases are then allowed to escape from a nozzle and, in accordance with Newton's third law, provide a forward thrust (Fig 1).