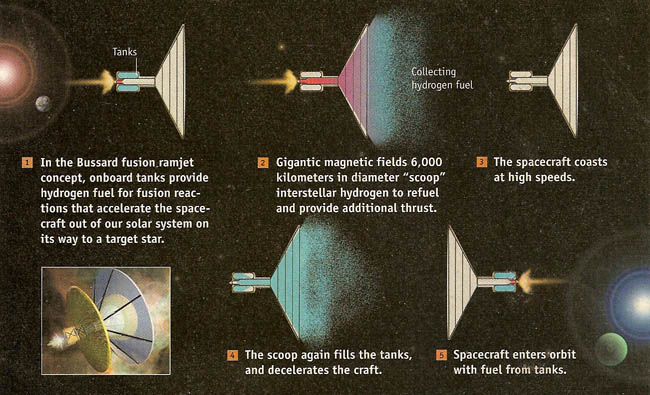 Main components of the Bussard ramjet. 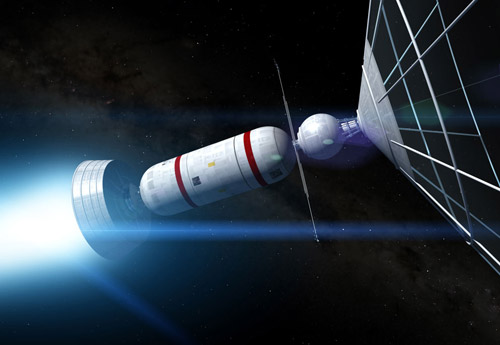 Artwork of a Bussard ramjet in flight. Credit and ©: Adrian Mann.

An interstellar ramjet is an ingenious extension of the ramjet concept to provide, potentially, a highly effective form of interstellar propulsion. It was first suggested by the American physicist Robert Bussard in 1960,1 and consequently is sometimes referred to as the Bussard ramjet.

Set against the desirability of achieving speeds for star travel that are a significant fraction of the speed of light is the perennial problem of rocketry – having to carry, in addition to the payload, the reaction mass needed for propulsion. The interstellar ramjet neatly avoids this problem by harvesting hydrogen for use as a propellant from the interstellar medium. The captured hydrogen is fed to a nuclear fusion reactor which supplies the energy for a high-speed exhaust.

Bussard's original design envisaged atomic hydrogen being mechanically scooped up by the spacecraft as it went along. However, his calculations suggested that, in order to achieve the "ideal" acceleration of 1g (see one-g spacecraft) in typical regions of interstellar space where the density of hydrogen atoms is about ~1 H-atom per cm3, a 1,000-ton spacecraft would need a frontal collecting area of nearly 10,000 km2. (In interstellar clouds where the average density is ~102 H-atoms per cm3, a scoop with one-tenth this area would suffice.) Even assuming a knowledge of materials science far in advance of our own, it seems inconceivable that such a scoop could be constructed with a mass less than that budgeted for the entire vehicle. A 10,000-km2 structure made of 0.1-cm-thick Mylar, for example, would weigh about 250,000 tons.

A way around this problem is to ionize the hydrogen ahead of the spacecraft using a powerful laser. The hydrogen ions – naked protons – can then be drawn in by a relatively small Bussard collector that generates a powerful magnetic field. Since the harvesting process is electromagnetic rather than mechanical, the scoop does not have to be solid (it can be a mesh) nor does it have to be unrealistically large, because the field can be arranged to extend far beyond the physical structure of the scoop.

However, difficulties remain. One is the enormous power needed to generate the Bussard collector's magnetic field and to operate the ionizing laser. Another problem concerns the way the ram scoop works. As the lines of the magnetic field converge at the inlet funnel, they will tend to bounce away incoming charged particles rather than draw them in. In effect the scoop will act like a magnetic bottle, trapping material in a wide cone in front of the vehicle and preventing it from being injected as fuel. A solution might be to pulse the magnetic field, but the implementation would not be easy. Yet another problem is that most of the collected matter will be ordinary hydrogen which is much harder to induce to fuse than either deuterium or tritium, hydrogen's heavier isotopes. Finally, the Bussard ramjet will only work when the vehicle is moving fast enough to collect interstellar mass in usable amounts. Therefore a secondary propulsion system is needed to boost the spacecraft up to this critical speed – about 6% of the speed of light.

A modified design, known as RAIR (ram-augmented interstellar rocket), proposed by Alan Bond in 1974, tackles the fusion-reaction problem by using the scooped-up interstellar hydrogen not as fuel but simply as reaction mass. The incoming proton stream is decelerated to about 1 MeV, then allowed to bombard a target made of lithium-6 or boron-11. Lithium-proton or boron-proton fusion is easy to induce and releases more energy than any other type of fusion reaction. The energy produced in this way is added to the mass stream which then exits the reactor. In the exhaust nozzle, the energy created by initially braking the mass stream is added back to it.2, 3

The so-called catalyzed-RAIR offers an even more efficient approach. After the incoming mass stream has been compressed, a small amount of antimatter is added. The reaction cross-section is not only enormous compared to fusion, it happens at much lower temperatures. According to one estimate, the energy release is such that the drive reactor of a 10,000-ton antimatter catalyzed-RAIR accelerating at 1g and maintaining 1018 particles per cm3 within the reactor only has to be about 3.5 m in diameter. The down side is that large amounts of antimatter would be needed for sustained interstellar flight.

Poul Anderson explored what might happen in the case of a runaway interstellar ramjet in his excellent science fiction novel Tau Zero.5 Larry Niven also made extensive use of this propulsion concept in his "Tales of Known Space" novels.

In the Star Trek universe, Bussard "collectors" are attached (usually at the forward end of warp nacelles) to all Federation starships to collect interstellar particles. They can also be operated in reverse to expel plasma.