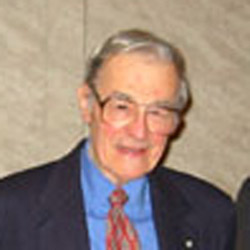 Robert Bussard was an American physicist who, in 1960, while working for the TRW Corporation of Los Angeles, suggested a form of interstellar propulsion based on the principle of the ramjet.1 This is now often referred to as the Bussard ramjet or the interstellar ramjet. His concept of harvesting the interstellar medium for fusion fuel has been widely used in science fiction and is familiar to Star Trek fans through the term "Bussard collectors".

Bussard spent much of his career engaged in fusion energy research with particular application to space vehicle propulsion. In 1958, while employed at the Oak Ridge National Laboratory, he coauthored (with R. D. DeLauer) the book Nuclear Rocket Propulsion2 (published by McGraw-Hill), which stimulated experimental work on the nuclear thermal rocket design known as Project Rover. A couple of years later he came up with his interstellar ramjet scheme. In the early 1970s, Bussard became Assistant Director at the Controlled Thermonuclear Reaction Division of what was then known as the Atomic Energy Commission. With fellow researcher Bruno Coppi, he later founded Inesco, a private firm financed partly by publisher Bob Guccione, which set out to build small, power-producing tokamak fusion reactors called Riggatrons. In his final years, Bussard worked on a promising new type of fusion device, called the Polywell, and built and tested several experimental devices, from 1994 through 2006.