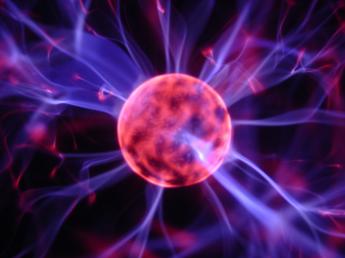 Plasma is a low-density gas in which the some of the individual atoms or molecules are ionized (and therefore charged), even though the total number of positive and negative charges is equal, maintaining an overall electrical neutrality. Plasma is considered to be a fourth state of matter.

Strictly speaking, almost all gas in space is a plasma, though only a tiny fraction of the atoms are ionized when the temperature is below about 1,000 K. The very low densities in space allow the electrons to travel without much obstruction, so paradoxically space is an almost perfect electrical conductor. Although charges can move around freely, averaged over even small volumes (say a million kilometers across) cosmic plasmas are always neutral.

Plasmas in space are permeated by magnetic fields. A good way to think about cosmic magnetic fields is in terms of field lines. These behave like rubber bands embedded in the plasma, so that as the plasma flows the field lines are pulled and stretched along with it. When they are stretched enough they can pull back on the plasma. Individual electrons and ions in the plasma feel a magnetic force, which makes them travel in a helical path around the field lines so that they can only travel long distances in the direction along the field. This binds the plasma together so that it behaves like a continuous medium, even when the individual electrons and ions almost never collide.