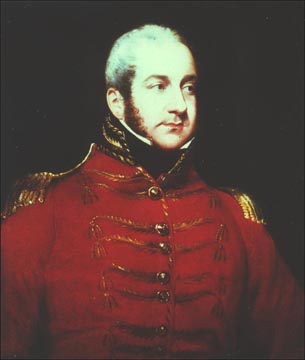 William Congreve was an artillery colonel in the British army whose interest in rocketry was stimulated by the success of Indian rocket barrages against the British in 1792 and again in 1799 at Seringapatam (see Tipu Sultan). Congreve's black powder rockets proved highly effective in battle. Used by British ships to pound Fort McHenry, they inspired Francis Scott Key to write of "the rockets' red glare" in a poem that later provided the words to The Star-Spangled Banner. Congreve's rockets were used in the Napoleonic Wars and in the War of 1812.

Congreve was the son of William Congreve, Comptroller of the Royal Laboratory at Woolwich. Young Congreve passed through the Royal Academy at Woolwich. Following the military success of his rockets, he was elected a Fellow of the Royal Society, and returned to parliament in 1812. Two years later he succeeded to the baronetcy and his father's place.

To begin with, Congreve carried out private investigations into rocket powder compositions and casing design. Later experiments so impressed the authorities that Congreve was allowed to use the Royal Laboratory at Woolwich. Here he produced several successful military rockets which were put to practical use during the European Wars of this period.

Incendiary rockets, specially developed for sea warfare by Congreve, played a notable part in the fall of Boulogne in 1806 during the Napoleonic Wars, and in the destruction of the French fleet. These marine projectiles contained an incendiary liquid which, upon impact, oozed out from holes in the warhead and coated the target with fire. The rockets had pointed noses, enabling them to stick into whatever they hit, and were fire in salvoes from special "projector" boats which were towed to the scene of battle by parent vessels. The devastation they inflicted on the wooden sailing vessels of the time was severe.

Large numbers of rockets were used in some of these early battles – some 25,000 were expended in the assault on Copenhagen in 1807. So effective had the war rocket become that in 1812 the British Army formed a special Rocket Brigade, which saw action during the Battle of Waterloo in 1815.

By modern standards, however, these early rockets were very crude, inaccurate, and unstable in flight. Improved accuracy and range came with the use of fins instead of the guiding stick. More efficient still was the axially-rotated rocket. Developed originally in the U.S., this was rotated by a series of small nozzles spaced round the main exhaust, producing an effect similar to that of a Catherine wheel. In England Congreve obtained the same effect by offsetting the main exhaust.

At the time of Congreve's death in 1828, designs for rockets 8 inches in diameter and weighing up to 1,000 lb. were in hand. An historic proposal was his patent, initially suggested by Frezier, a French artillery engineer, for a series of rocket charges laid in line within a single tube, so that the charges ignited successively, thereby increasing the firing duration. This became known as the step-rocket principle.