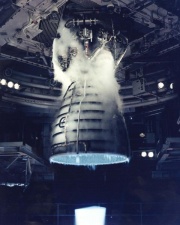 A nozzle is a specially-shaped tube, or duct, connected to the combustion chamber of a rocket engine in which the gases produced in the chamber are accelerated to high velocities, thereby efficiently converting the pressure of the exhaust into thrust.

The nozzle must be carefully designed in order to change the high-pressure, low-velocity gas at the nozzle entrance (inside the combustion chamber) to a low-pressure, high-velocity flow at the exit. From the combustion chamber the hot gas is constricted at the throat – the nozzle's narrowest point – where it reaches Mach 1 (the local speed of sound). Then the nozzle expands along a carefully controlled contour, allowing the gas to gain speed and lose pressure. The larger the nozzle's cross-section at the exit, the higher the speed and the lower the pressure that the gas can achieve at the exit. For optimum thrust the gas pressure at the nozzle exit should be exactly equal to the outside air pressure. In the vacuum of space the outside pressure is zero, so that it is impossible for this optimum to be achieved. The bigger the exit area of the nozzle, the closer the thrust will be to optimum; however, there is a point at which gains in thrust are offset by the extra mass needed to make the nozzle wider. Even during the atmospheric portion of a rocket's flight it is impossible to achieve theoretical optimum performance because the outside air pressure changes as the vehicle climbs. All designers can do is target the performance of a nozzle to some average outside pressure.

Like the combustion chamber the nozzle throat gets very hot. Nozzle throats are often cooled, by circulating fuel directly behind the pressure wall to cool it. The fuel passes through while it is still cool on its way to the combustion chamber. This has the added bonus of preheating the fuel before combustion, making more energy available from the combustion to provide thrust. Recently new materials have become available, including ceramics and composites, that can withstand extremely high temperature. These materials often slowly ablate under the extreme conditions in the nozzle throat of a high performance rocket; however, the ablation rates may be tolerable in a rocket that is only fired once. In the case of a rocket designed for multiple firings, either in the same mission or multiple missions, then cooling rather than ablation is likely to be the method of choice.

A nozzle positioned so that its line of thrust is not parallel to the direction of flight.

The ratio of a nozzle's throat area to the exit area. The ideal nozzle area ratio allows the gases of combustion to exit the nozzle at the same pressure as the ambient pressure.

The efficiency with which the nozzle converts the potential energy of a burned fuel into kinetic energy for thrust.

The angle of divergence of a nozzle.