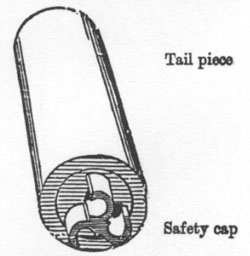 William Hale was an English inventor who developed the technique of spin stabilization. Even following William Congreve's work, the accuracy of rockets was not much improved. The devastating nature of war rockets was not their accuracy or power, but their numbers. During a typical siege, thousands of them might be fired at the enemy. All over the world, rocket researchers experimented with ways to improve accuracy. It was Hale who thought of the idea of allowing the escaping exhaust gases to strike small vanes at the bottom of the rocket, causing it to spin like a rifled bullet in flight. Hydraulic machine presses were used to compress the gunpowder into the shell, making the manufacture of the rockets safer and faster than previous methods. The Hale war rocket was patented in 1844. Versions of Hale's rockets were used by both the British and US armies. Two sizes were used in Britain, weighing 9 lb and 24 lb, with ranges of about 1 mi and 1½ mi, respectively.

Around this time, however, developments in conventional artillery caused military interest to veer in this direction. Breech-loaded rifled cannon appeared, with a greatly increased rate of fire and much improved accuracy. Quite suddenly, rockets disappeared from the military scene. Apart from use on a minor scale against balloons and Zeppelins in World War I, they were not to reemerge for nearly a hundred years. In the intervening period, there were one or two civil developments, such as that of rocket-propelled life-lines.