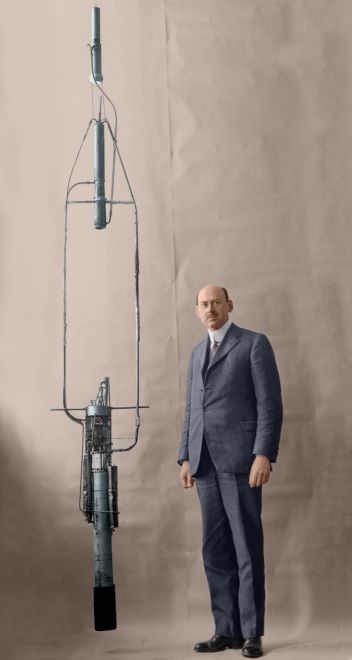 Robert Goddard was an American physicist and rocket pioneer. Although historians point to Konstantin Tsiolkovsky and Hermann Oberth as being the founders of rocket theory, Goddard, a native of Worcester, Massachusetts, is generally regarded as the father of the practical modern rocket. Yet it was only after his death that the true value of his work was widely recognized.

Goddard's early attraction to rocketry is clear from an autobiography written in 1927, but only published in 1959, in which he recalls as a 17-year-old climbing into a cherry tree to prune branches and finding himself daydreaming instead of interplanetary travel:

It was one of the quiet, colorful afternoons of sheer beauty which we have in October in New England, and as I looked toward the fields at the east, I imagined how wonderful it would be to make some device which had even the possibility of ascending to Mars, and how it would look on a small scale, if sent up from the meadow at my feet.

From this point on, Goddard's ambition, to develop the practical means of achieving spaceflight, began to take shape. He earned his PhD in physics at Clark University, Worcester, in 1911, and went on to become head of the Clark physics department and director of its physical laboratories. His first serious work on rocket development began in 1909, although it was not until 1915 that he carried out his first actual experiments, involving solid-fueled rockets, having already been granted patents covering such key components as combustion chambers, nozzles, propellant feed systems, and multistage launchers. In 1916, the Smithsonian Institution awarded him $5,000 to perform high-altitude tests. But a year later, following the United States' entry into World War I, he found himself temporarily in California, working on rockets as weapons, including the forerunner of the bazooka.

In 1919 Goddard published the first of his two important monologues on rocketry. Entitled A Method of Attaining Extreme Altitude and based on the report that had earned him the Smithsonian grant, it was written in typically cautious Goddard style. It would probably have attracted little attention but for its final section on the "Calculation of Minimum Mass Required to Raise One Pound to an 'Infinite' Altitude." Despite Goddard's sober analysis of the problems involved in sending a payload from Earth to the Moon, and of proving that the target could be reached (by an explosion of flash powder), he was lampooned by the popular press. However, he continued with his research and moved into the field of liquid-fueled rockets. On Mar 16, 1926, Goddard carried out the world's first launch of such a system using a strange-looking, 3-m-long rocket powered by a mixture of liquid oxygen and gasoline ignited by a blow-torch. The device rose for two and a half seconds, reaching a height of 67 m and a maximum speed of 96 kilometers per hour, before its fuel was exhausted.

His work eventually drew the attention of Charles Lindbergh who, in 1929, arranged for a $50,000 grant to the rocket pioneer from the Guggenheim Fund for the Promotion of Aeronautics. Goddard's increasingly ambitious tests demanded more open space than rural Massachusetts could safely provide (the local fire chief having already banned him from raining down any further missiles on his neighbors' land), so Goddard took his experiments to the more open skies near Roswell, New Mexico. There he and his wife, together with a few assistants, conducted a remarkable, decade-long program of tests that resulted in the first gyro-controlled rocket guidance system and flights of large, variable thrust, liquid-fueled rockets to heights of up to 2,300 m and speeds of over 800 km/h. Some of his results are summarized in his second classic monologue, submitted to the Guggenheim Foundation in 1936, Liquid-Propellant Rocket Development1. His final major work, Rocket Development: Liquid-Fuel Rocket Research, 1929-19412, was published posthumously in 1948.

Goddard died in 1945, enthusiastic to the end by the prospects of rocket-propelled spaceflight but disappointed by the failure of officialdom to back his work to a substantial degree – a failure due in part to the secrecy in which Goddard kept many of the technical details of his inventions. Only after his death were his contributions properly recognized. In 1959, one of NASA's major facilities, the Goddard Space Flight Center, was named in his honor. The following year, his widow together with the Guggenheim Foundation were awarded one million dollars in settlement for government use of 214 of the pioneer's patents.3