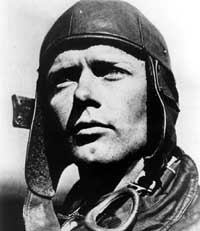 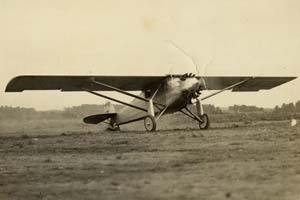 The Spirit of St Louis.

Charles Lindbergh was a pioneering aviator who gained fame as the first pilot to fly solo across the Atlantic in 1927. Such was his public stature following this flight that he became an important voice on behalf of aerospace activities until his death.

Lindbergh served on a variety of national and international boards and committees, including the central committee of NACA (National Advisory Committee for Aeronautics) in the United States. He became an expatriate living in Europe following the kidnapping and murder of his two-year-old son in 1932. There, during the rise of fascism, Lindbergh assisted American aviation authorities by providing them with information about European technological developments. After 1936 he was especially important in warning the United States of the rise of Nazi air power, and helped with the war effort in the 1940s by serving as a consultant to aviation companies and the government. Subsequently, he lived in Connecticut and then Hawaii.


The following brief biography is reproduced from the U.S. Centennial of Flight Commission's website.

While growing up on a farm near the small midwestern town of Twin Falls, Minnesota, Lindbergh was fascinated by speed. As a teenager, the thin, socially awkward young man acquired a motorcycle, which he raced around town, testing the limits of his courage – and honing his skills at the controls of a speeding machine. Two years after enrolling at the University of Wisconsin to study mechanical engineering, the 20-year-old Lindbergh dropped out and began a life of aerial adventure. He toured the country with a veteran barnstormer who taught him how to wingwalk and parachute jump. In 1923, Lindbergh borrowed $500 from his father and bought a World War One surplus Curtiss 'Jenny' biplane, in which he finally made his first solo flight.

Although just 22 years old, Lindbergh was already a skilled pilot when he enlisted in the Army Air Service in 1924. A year later, he graduated from flight training school in San Antonio at the top of his class. After completing his army service, he took a job as chief pilot with the Robertson Aircraft Corporation in St. Louis, inaugurating a commercial airmail route between that city and Chicago. By his mid-twenties, Lindbergh had logged hundreds of hours in the air and been forced to parachute to safety at least four times. Still, the fearless young flyer's greatest – and most dangerous – adventure was yet to come.

In 1919, Raymond Orteig, a New York hotel-owner, had offered $25,000 to the first aviator to fly nonstop from New York to Paris. Eight years later, with the prize money still unclaimed, Lindbergh persuaded nine St. Louis businessmen to share the $10,580 cost of custom-building an airplane, expressly to go after it. He named the Ryan Aeronautical Company's M-2 strut-based monoplane The Spirit of St. Louis.

About two hours after sunrise on 20 May 1927, Lindbergh taxied his small, single-engine aircraft down the rainy runway at Long Island's Roosevelt Field. It was so loaded down with fuel that it almost touched the trees and telephone wires near the field during its 7:52 am takeoff. Using a magnetic compass to navigate, the 25-year-old aviator – dubbed "the Flying Kid" or 'the Flying Fool' by a skeptical press corps – charted a course north-northeast over the Atlantic.

Nearly a day later, with great relief, Lindbergh spotted the southwestern coast of Ireland. He flew over the British Commonwealth republic, then over England and the English Channel.

Thirty-three and one-half hours and 3,610 mi (5,810 km) after leaving New York, Lindbergh made aviation history when he landed at Le Bourget field near Paris at 10:21 pm. The exhausted young flyer was instantly mobbed by thousands of jubilant admirers from whom he literally had to be rescued by French police.

After being feted by British and European monarchs, Lindbergh returned to New York, where he received a hero's welcome from four million people. In Washington, President Calvin Coolidge awarded Lindbergh the first-ever Distinguished Flying Cross. The US Congress presented him with the Congressional Medal of Honor. He was promoted from lieutenant to colonel in the Army Air Corps reserves.

For the next five years, 'Lucky Lindy' or 'the Lone Eagle,' as Lindbergh now was known to an adoring public, continued to live a hero's life. He flew the Spirit of St. Louis to all 48 states to promote the neophyte commercial aviation industry, then took it on a goodwill tour of Latin America.

During a stopover in Mexico City, he was hosted by US Ambassador Dwight Morrow. Lindbergh was smitten by the wealthy man's shy, beautiful 21-year-old daughter, Anne. They were married in May 1929. Lindbergh taught his bride to fly. Together, they charted new commercial aviation routes, including the Great Circle-Polar route to China and West Africa to Brazil. In Jun 1930 their first child, Charles Augustus Lindbergh, Jr., was born. Respected and adulated by millions, Charles and Anne Lindbergh were living what seemed a fairy-tale perfect life.

Less than two years later, however, America's Golden Couple was visited by tragedy. Bruno Hauptmann, a German immigrant carpenter, kidnapped Charles Jr. from their suburban New Jersey home. Although a ransom was demanded and paid, the Lindbergh's 20-mo-old son was never returned and was later found dead. Hauptmann was subsequently arrested, tried, convicted on capital charges, and executed.

The kidnapping and murder of the first-born son of America's hero brought wide and sensational press coverage. To escape the unwelcome publicity, Lindbergh moved his family – which now included three-year-old son Jon – to Kent, England.


Germany and the War

While living in Europe, Lindbergh was invited by the Nazi government to inspect the German aircraft industry, whose size and capabilities for building advanced combat aircraft greatly impressed him. Adolf Hitler awarded the famed American aviator a German medal of honor. Although Lindbergh was harshly criticized by US critics of the Nazi regime, he refused to return the medal, and later described the German dictator as "undoubtedly a great man."

In 1941, Lindbergh became a spokesman for the America First movement. He gave speeches and radio broadcasts for the isolationist group, in which he criticized Jews, the British, and supporters of President Franklin D. Roosevelt for allegedly trying to drag the United States into the burgeoning world war. Publicly castigated by the president as a traitor and defeatist, Lindbergh angrily resigned his commission in the Army Air Corps.

But after the Japanese bombed Pearl Harbor in December 1941, Lindbergh stopped his speechmaking and tried to rejoin the military. Roosevelt blocked the move. However, in 1944, in the guise of civilian test pilot, Lindbergh flew some 50 combat missions over the South Pacific before senior commanders learned of the ruse and grounded him.

In May 1945, following the Allied victory in Europe, Lindbergh received a rare chance to officially redeem himself. The US government asked him to once again assess Germany's air capabilities, this time focusing on its V-2 rocket program. Lindbergh gratefully obliged. Aware of Lindbergh's war service and his historic contributions to flight, President Dwight D. Eisenhower later restored Lindbergh's military commission, promoting him to the rank of brigadier general in the U.S. Air Force Reserve.

In 1953, Lindbergh published The Spirit of St. Louis. The dramatic account of his historic 1927 flight was awarded the Pulitzer Prize in 1954. In the postwar years, Lindbergh also became a commercial adviser to Pan American World Airways and Boeing Aircraft Corporation and served as a consultant to the air force chief of staff. However, he now kept a low public profile – until the 1960s, when the cause of conservation led him to reenter public life. In July 1964 Lindbergh published an article in the popular magazine Reader's Digest titled "Is Civilization Progress?" in which he emerged as an advocate for conservation. He expressed the belief that the quality of life could be preserved and improved only if technology and conservation were successfully balanced. Traveling round the world, Lindbergh worked to help the indigenous tribes of the Philippines and Africa and to save the humpback and blue whale, which were in danger of extinction. He opposed the development of supersonic passenger aircraft because he feared the effect they would have on the environment.

In 1977, on the occasion of the 50th anniversary of his solo flight, the Charles A. Lindbergh Fund was created by friends of Lindbergh at The Explorers Club in New York City. The foundation's mission was both to further Lindbergh's belief in balance between technology and conservation and to honor him as a flyer and for his other aeronautical achievements. In 1994, the name of the foundation was changed to the Charles A. and Anne Morrow Lindbergh Foundation to reflect the couple's shared vision.

In 1972, Lindbergh contracted cancer. With his wife Anne at his side, he died on 26 August 1974, on the couple's Hawaiian island retreat at Maui. Although he had chartered new air routes, fathered five children, written books, fought in a war, promoted commercial aviation, global conservation, and US isolationism during an eventful 72 years, in the end none of that mattered as much to the world as the brave and unexpected achievement while an obscure young man.