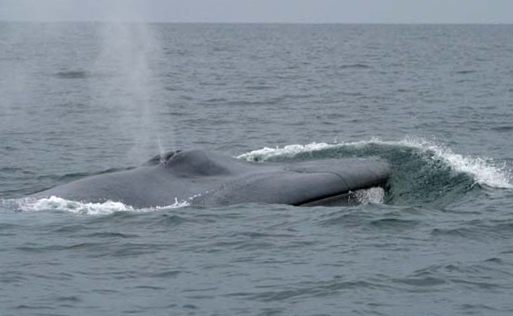 The blue whale, Balaenoptera musculus (Linnaeus 1758), is a widely distributed species of baleen whale. Blue whales in the Northern Hemisphere are generally smaller than those in the Southern Ocean. Maximum body length in the North Atlantic was about 88.5 ft (27 m) and the largest blue whale reported from the North Pacific was about 88 ft (26.8 m). Adults in the Antarctic can reach a maximum body length of about 108 ft (33 m) and can weigh more than 330,000 lb (150,000 kg).

As is true of other baleen whale species, female blue whales are somewhat larger than males. Blue whales are identified by the following characteristics: a long-body and comparatively slender shape; a broad, flat "rostrum" when viewed from above; a proportionately smaller dorsal fin than other baleen whales; and a mottled gray color pattern that appears light blue when seen through the water.

Subspecies of the blue whale include:

Scientists have yet to discern many details regarding the life history of the blue whale. The best available science suggests the gestation period is approximately 10–12 months and that blue whale calves are nursed for about 6–7 months. Most reproductive activity, including births and mating, takes place during the winter. Weaning probably occurs on, or en route to, summer feeding areas. The average calving interval is probably two to three years. The age of sexual maturity is thought to be 5–15 years. There are no known differences in the reproductive biology of blue whales in the North Pacific and North Atlantic oceans.

Blue whales inhabit sub-polar to sub-tropical latitudes. Poleward movements in spring allow the whales to take advantage of high zooplankton production in summer. Movement towards the subtropics in the fall allows blue whales to reduce their energy expenditure while fasting, avoid ice entrapment in some areas, and engage in reproductive activities in warmer waters of lower latitudes. Although the species is often found in coastal waters, blue whales are thought to occur generally more offshore than humpback whales, for example.

Blue whales are found in oceans worldwide and are separated into populations by ocean basin in the North Atlantic, North Pacific, and Southern Hemisphere. They follow a seasonal migration pattern between summering and wintering areas, but some evidence suggests that individuals remain in certain areas year-round. The extent of knowledge concerning distribution and movement varies with area and migratory routes are not well known but, in general, distribution is driven largely by food requirements. For example, in the Gulf of St. Lawrence blue whales prefer deep waters where krill is concentrated.

The overall distribution of blue whales in the North Atlantic extends from the subtropics to Baffin Bay and the Greenland Sea. Blue whales are most frequently sighted in the waters off eastern Canada, with the majority of recent records from the Gulf of St. Lawrence, where they are present throughout most of the year. They are most common during the summer and fall feeding seasons and typically leave by early winter to avoid ice entrapment. Although they are rare in the shelf waters of the eastern US, occasional sightings of blue whales have been made off Cape Cod, Massachusetts. It is believed this region may represent the current southern limit of the blue whales' feeding range. In addition, there is some evidence to suggest that blue whales occasionally stray into the Gulf of Mexico and the Caribbean, but they are less common in these waters. Some scientists believe blue whales in the North Atlantic occur in relatively discrete feeding populations whereas other evidence suggests blue whales may comprise one "panmictic" population.

The blue whale's range is known to encompass much of the North Pacific Ocean, from Kamchatka to southern Japan in the west, and from the Gulf of Alaska and California south to at least Costa Rica in the east. The species is found primarily south of the Aleutian Islands and the Bering Sea. Whaling and sighting data suggest the existence of at least five subpopulations of blue whales, with an unknown degree of mixing among them:

Additional threats that have not been documented but could potentially affect these populations include:

Although whaling substantially reduced blue whale populations worldwide during the first half of the 20th century, whaling is no longer considered a threat today.

A primary threat to blue whales is mortality and serious injury caused by ship strikes. In the eastern North Pacific, ship strikes were implicated in the deaths of blues whales in 1980, 1986, 1987, 1993 and 2002. The average number of blue whale mortalities in California attributed to ship strikes was 0.2 per year from 1991–1995 and from 1998–2002. In September 2007, three blue whale mortalities were confirmed to be caused by ship strikes in the Santa Barbara Channel off Southern California. These deaths were part of a larger Unusual Mortality Event, declared by the Working Group on Marine Mammal Unusual Mortality Events. In the western North Atlantic, at least nine percent of the whales in the Gulf of St. Lawrence have injuries or scars attributed to contact with ships. This area has a relatively high risk of ship strikes because the St. Lawrence Seaway has heavy ship traffic during the time of year when blue whales are relatively abundant. In March 1998, a dead 20 m (66ft) male blue whale was brought into Rhode Island waters on the bow of a tanker. The cause of death was determined to be ship strike. There are no records of ship strikes for blue whales in the western North Pacific but mortalities caused by ship strikes have likely occurred without being reported.

Despite the lack of observed fisheries interactions in the last decade, incidental take in fisheries threaten blue whales for two reasons. First, past records of entanglements suggest that interaction with fishing gear may affect blue whales. Second, entanglement rates may be underestimated because blue whales may break through or carry away fishing gear, perhaps suffering unrecorded subsequent mortalities or serious injuries. It is also likely that stranding data underestimate the number of whales killed by fishing gear, because most whales do not drift far enough to strand on beaches or to be detected floating in the nearshore corridor. Although direct observation of mortality is rare, at least two documented cases of dead blue whales are apparently from the effects of entanglement in fishing gear (one in 1987 off Stellwagen Bank and the other in the 1990s in the Gulf of St. Lawrence).

Little is known about natural mortality of blue whales in the North Atlantic. Ice entrapment is known to injure and kill some blue whales, particularly along the southwest coast of Newfoundland during late winter and early spring. In the Gulf of St. Lawrence, scarring on the dorsal surface of some whales is thought to be from contact with ice. Also, two blue whales bore rake-like markings assumed to be from the teeth of killer whales (Orcinus orca). However, no direct evidence of predation on blue whales has been reported in this area.

A well-documented observation of killer whales attacking a blue whale off Baja California proves that blue whales are at least occasionally vulnerable to these predators. A high proportion of the blue whales in the Gulf of California bear injuries or rake-like scars that are the result of encounters with killer whales, although the extent to which such attacks are fatal is unknown. Unlike in the western North Atlantic, injury or suffocation from ice entrapment is not known to affect blue whales in the North Pacific.

Anthropogenic noise, competition for prey resources, habitat degradation, and vessel disturbance are additional concerns; however, there is little evidence available to describe or quantify the impacts of these threats on blue whales. For example, while anthropogenic noise is known to be a threat for other cetaceans little is known about whether, or how, vessel noise affects blue whales. Competition for prey resources is possible between blue whales and other sympatric whale species but there is no direct evidence for interspecific competition and it is unlikely blue whales compete with humans for prey resources. Habitat degradation (e.g., chemical pollution) has occurred in some areas of the North Atlantic (e.g., St. Lawrence River) but the impacts of this degradation have not been proven to affect blue whales and are understudied. Lastly, the effect of vessel disturbance (e.g., whalewatching boats) is of concern but there is no direct evidence to demonstrate that persistent close approaches by tour boats has a negative effect on blue whales.

In 1966, the IWC banned commercial whaling for blue whales and no whaling (either "aboriginal subsistence" or commercial) occurs at present.

Illegal whaling for blue whales has been documented or is likely to have occurred in the North Pacific, North Atlantic, and Southern Hemisphere. A small number of illegal kills of blue whales have been documented in the Northern Atlantic off Canada and Spain, and in the eastern North Atlantic. Blue whales were also killed in the Southern Hemisphere by the Soviet Union after 1966. Some illegal whaling by the USSR also occurred in the North Pacific; it is likely that blue whales were among the species taken by these operations, but the extent is not known.

No aboriginal whaling for blue whales is known to exist. Aboriginal hunters who target whales off the coast of the Lesser Antilles and Greenland do not target blue whales. Further, Norwegian whaling operations target only minke whales, and the commercial whaling stations in Iceland, Spain, and the Portugese islands of the Azores and Madeira remain officially closed.