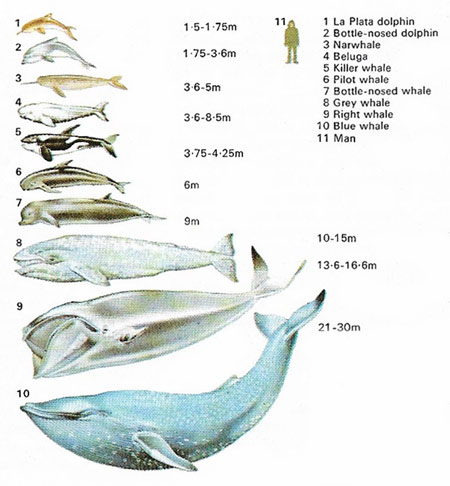 Whales range in size from the small river dolphins to the giant blue whale. The majority of species do not exceed 10 m (30 ft) and many of the dolphins and porpoises reach only 3 m (9 ft).

The bottle-nosed whales belong to the groups called beaked whales. They have only one or two pairs of teeth and feed on squid and fish. They range in length from 4.5 to 134 m 14 to 40 ft).

The narwhal is found in Arctic seas. It reaches a length of 3.6 to 5 m (11 to 16 ft). The distinctive tusk can grow to 2.8 m (9 ft) in length. It is generally found only in the male and develops from the left tooth of a pair in the upper jaw. The function of the tusk is not known. Narwhals feed on fish and squid.

The large triangular dorsal fin and the black and white body are the two obvious features of the killer whale (Orcinus orca). It is found mostly in polar seas and is generally considered to be the most ferocious of the whales. Any creatures in the sea are considered as food by the 9-m (30-ft) killers.

The pilot whale is often seen in schools containing several hundreds. It grows to 8.5 m (26 ft) in length and can weigh over 1,000 kg (2,200 lb). It feeds mostly on squid. If frightened near a sloping shore a whale school may become stranded and die. The three species of pilot whale are fund in most oceans except the polar seas. They migrate between warm and cold waters depending on the season. Breeding takes place in warm water. They have a life-span of about 50 years.

The gray whales are confined to the North Pacific. There are two populations, one living on the eastern side and one on the western side. From the northern seas they migrate south in winter to breed in the shallow, warmer seas off Baja California and South Korea. They feed on plankton, which they strain from the water by means of baleen plates in their mouths. 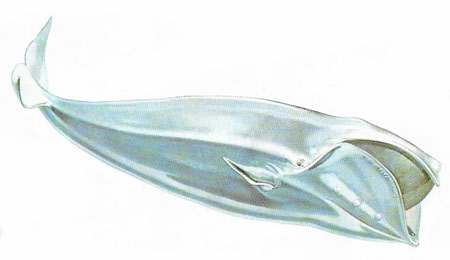 The right whales are found in all the world's oceans including subtropical waters. There are three genera – the Greenland right whale (Balaena sp), the black right whales (Eubalaena spp), and the pygmy right whales (Caperea spp). Their name derives from the fact that they were the 'right' whales to hunt. They grow to 18 m (55 ft). 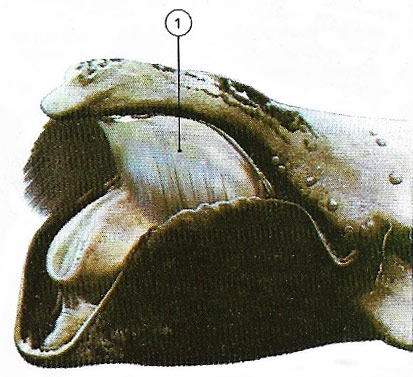 The head of a baleen whale is enormous and is about a third or a quarter of the animal's total length. Fringing each side of the mouth is a series of baleen plates (1) which act as food strainers. When feeding, the whale swims through swarms of krill (small, shrimp-like marine animals) and when sufficient have been trapped it dives, closes its mouth, and swallows.

A cetacean is any member of the order Cetacea, which includes the whales, dolphins, and porpoises. These intelligent, aquatic, air-breathing, fish-like mammals have streamlined bodies, a pair of front flippers, and horizontal tail flukes that operate with an up-and-down stroke making speeds of 45–55 km/h possible. Their bodies are insulated by a thick layer of blubber. About 78 species of cetacean have been identified. Their length varies from about 1.5 m (4.9 ft) to more than 30 m (100 ft), and their weight from about 36 kg (80 lb) to 100 tons.

The whales, along with the Carnivora, are descended from a common mammalian ancestor that lived in the Cretaceous period more than 65 million years ago. While most of the carnivores developed on land, the ancestors of the whales took to the water and became completely adapted to the aquatic way of life. As they evolved, tail flukes developed for locomotion, the hind limbs disappeared and the forelimbs became modified to form balancing and steering paddles.

There are two main groups, or suborders:the baleen whales (Mysticeti), of which the relatively few species vary from 6 to over 30 m (20 to 100 ft) in the length and the largest weigh more than 100 tons, and the toothed whales (Odontoceti), which are the more numerous and mostly much smaller. There are 11 species of baleen whales and 67 species of toothed whales. The baleen whales have no teeth but carry instead triangular plates of horny material in the roofs of their mouths. These 'whalebones' are used to strain krill – small shrimp-like organisms that are the baleen whale's only food – from the seawater. Most toothed whales have large numbers of simply shaped teeth in their mouths and feed almost entirely on fish and squid.

Whales are the only mammals that live the whole of their lives in water. Unlike seals they do not even return to the land to breed. Although they are aquatic creatures they must surface at regular intervals to take in oxygen and release waste carbon dioxide. The nostrils, situated at the top of the head, are tightly closed during submergence.

All whales can hold their breath for a long time – some of them for up to two hours. But if water enters a whale's lungs it drowns as any other air-breathing creature would. The distinctive spout that displays the presence of a whale, thrown up just before it surfaces, is a mixture of water and condensed vapor from the animal's breath.

Whales have been known to dive to depths of 1,500 m (4,800 ft) and they are able to do this by means of various physiological adaptations. Before diving the air in the whale's lungs is changed completely; to do this the whale breathes several times in quick succession. During the dive the heartbeat slows and blood is is shunted from the muscles to the brain. The centers in the brain that control breathing, unlike those in man, are relatively insensitive to the increase in carbon dioxide in the blood and as a result the whale is not 'forced', as a human would be, to take another breath when the carbon dioxide concentration rises.

Whales can grow so huge because their bodies are supported by water. The blue whale (Sibbaldus musculus) is the largest animal ever to have lived; sizes of up to 34 m (113 ft) have been recorded for the female blue whale. Almost all traces of hair and fur have been lost, but these insulating devices are replaced by thick layers of fat or blubber beneath the skin. The efficiency of the blubber as an insulator is so great that the heat produced in the decomposition of a dead whale can even cook and char the flesh.

Whales lack and sense of smell and cannot see very well. As a result they have to reply greatly on their senses of hearing and touch. Recent studies have also shown that whales make a range of sounds and some of these have been shown to involve communication between individuals. This may be so elaborate that it comprises a primitive language. Sound is used for both echolocation of prey and orientation – the stranding of some species on sandy beaches may be due to an absence of echo reflection.

Whales and dolphins are found in all the oceans of the world and some dolphins live in freshwater rivers and lakes. Many whales, especially those from the colder seas, migrate to warmer waters to breed. One of the best known is the Californian gray whale (Eschrichtius glaucus), which makes its annual migrations down the west coast of North America to the lagoons and estuaries of Baja (Lower) California.

Usage of the names whale, dolphin, and porpoise can be confusing. As the above classification indicates, all cetaceans can correctly be called whales; specifically, all dolphins and porpoises can be called toothed whales. However, it is common practise to call any cetacean that as an adult can reach more than about 9 feet in length a whale, and anything smaller than this a dolphin or a porpoise. Dolphins and porpoises can be distinguished in four ways:

Cetaceans have long been noted for their intelligent and sometimes apparently compassionate behavior (see dolphins as a form of alien intelligence). More recently, it has become clear that they produce an extraordinary variety of complex vocalizations across a wide frequency range, which in addition to uses such as echo-location and mating rituals, may serve as a sophisticated form of communication (see songs of humpback whales).

"By 2100 AD on Earth, three species of cetacean had been recognized as intelligent and admitted to the United Nations. Their lawsuit against the former whaling nations had not been resolved, and in fact never was. The cetaceans enjoyed the legal gymnastics too much ever to end it."
– Larry Niven, "At the Bottom of a Hole" (1966)