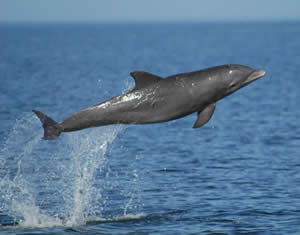 The bottlenose dolphin (Tursiops truncatus) is one of the best known species of marine mammals. It is a cetacean, and, more specifically, a type of toothed whale (i.e., a member of the suborder Ordontoceti).

Bottlenose dolphins have a robust body and a short, thick beak. Their coloration ranges from light gray to black with lighter coloration on the belly. Inshore and offshore individuals vary in color and size. Inshore animals are smaller and lighter in color, while offshore animals are larger, darker in coloration, and have smaller flippers. Bottlenose dolphins can sometimes be confused with rough-toothed dolphins, Risso's dolphins, and Atlantic spotted dolphins in regions of overlapping distributions.

Bottlenose dolphins are commonly found in groups of 2 to 15 individuals. Offshore herds sometimes have several hundred individuals. This species is often associated with pilot whales and other cetacean species. They frequently ride the bow wakes of ships and sometimes ride in the surf caused by storms.

Bottlenose dolphins are generalists and feed on a variety of prey items endemic to their habitat, foraging individually and cooperatively. Like other dolphins, bottlenose dolphins use high frequency echolocation to locate and capture prey. Coastal animals prey on benthic invertebrates (see benthos) and fish, and offshore animals feed on pelagic squid and fish. Bottlenose dolphins employ multiple feeding strategies, including "fish whacking," in which they strike a fish with their flukes and knock it out of the water.

Sexual maturity varies by population and ranges from 5–13 years for females and 9–14 years for males. Calves are born after a 12 mo gestation period and are weaned at 18 to 20 months. On average, calving occurs every 3 to 6 years. Females as old as 45 years have given birth.

Bottlenose dolphins are found in temperate and tropical waters around the world. There are coastal populations that migrate into bays, estuaries and river mouths as well as offshore populations that inhabit pelagic waters along the continental shelf.

The bottlenose dolphin has a worldwide distribution ranging from latitudes of 45°N to 45°S.