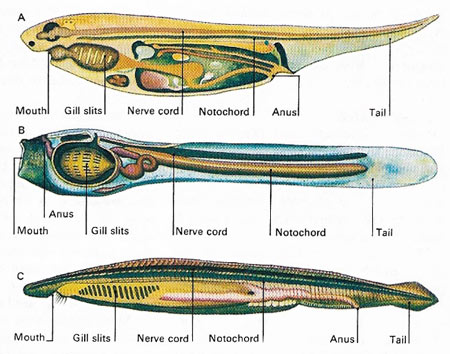 All chordates conform, at some stage in their life cycle, to a generalized body plan (A). This has a stiffening rod, the notochord, above which is situated a tubular nerve cord. Gill slits behind the mouth are used in respiration and there is a post-anal tail. In the sea squirt chordate features are obvious (B) in the 'tadpole' larva's tail. The lancelet or amphioxus (C) has all the chordate characteristics.

A chordate is any member of the phylum Chordata: an animal with a notochord (a cartilaginous rod that extends the length of the body), a dorsal hollow nerve cord (a fluid-filled tube that runs the length of the body), gill slits or pouches, and a tail at some stage in its life cycle. Chordates include mammals, birds, reptiles, amphibians, and fishes, known collectively as vertebrates, and three subphyla of invertebrates. The latter are modern remnants of the early chordates, or protochordates, from which all the animals with backbones arose. They are highly specialized survivors of a group that, in the distant past, was probably numerous and highly successful. These comparative rarities belong to three sub-phyla known as the Cephalochordata (lancelets), Hemichordata (acorn worms), and Tunicata (sea squirts). The most primitive representatives of the vertebrates proper are the Agnatha, surviving representatives of which are the hagfish and the lampreys.

The basic chordate features are shown clearly by the larva of a sea squirt. It has a hollow dorsal nervous system, the tail is supported by a notochord, and though the gut is not well developed (the larva does not feed) it usually has a pair of gill slits.