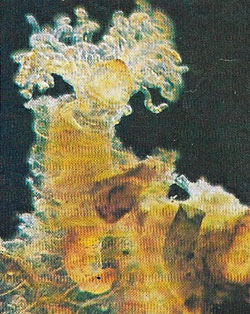 A branched tube is the home of each individual of Rhabdopleura, a pterobranch and a colonial relative of the acorn worm. New individuals are produced by asexual budding from the creeping base of the animal, the stolon. Rhabdopleura is 5 mm (0.20 in) long.

The hemichordata is a subphylum of the chordata (see chordate) containing two types of animals: worm-like burrowing forms, known as acorn worms, and sedentary forms, known as pterobranchs (an example of which is shown in the ullistration). All are marine. The burrowing forms have soft bodies divided into proboscis, collar, and trunk. The proboscis and collar are distensible. The sedentary forms are colonial, a number of individuals called zonoids being enclosed in a gelatinous "house."