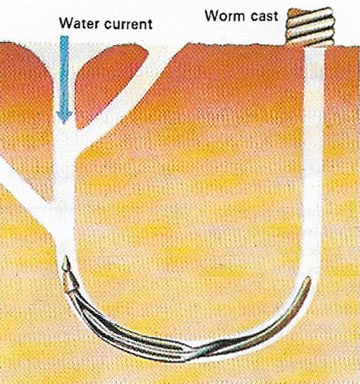 Worm casts on the beach can be made by burrowing acorn worms such as Balanoglossus. The worms live in tubes in the sand, the walls of which the worm secretes. As a result of its feeding habits the worm's alimentary tract becomes filled with sand and it is this that is discharged at low tide to form the familiar curled worm cast. Acorn worms vary from 2 cm (0.75 in) to 2.5 m (7.5 ft) long. 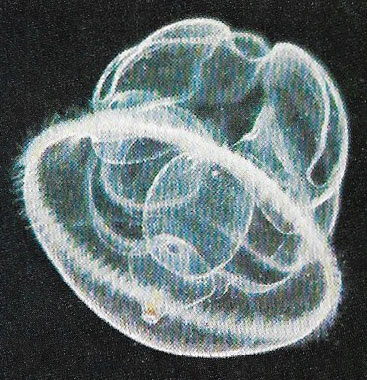 The larva if the acorn worm is known as a tornaria. This larva is one of the mainstays of the evidence that the early chordates, the vertebrate ancestors, evolved from echinoderms, for the tornaria is so like the larvae of some starfish that for many years it was mistaken for one of them. The significant difference is that the tornaria has the gill clefts typical of chordates. The tornaria is part of the zooplankton and is seen her magnified over 30 times.

The acorn worms, marine and burrowers, are creatures whose physical make-up has some features in common with echinoderms and some in common with true chordates.

Some acorn worms have the tubular nerve cord and most have the gill slits typical of chordates but the slits are used for feeding rather than breathing; and although acorn worms possess an internal structure that looks like a notochord this is formed in the embryo in quite a different fashion from a true notochord. The adult worm may resemble a simple chordate but the larval stages of its development are almost identical to those of starfish and sea-urchins, and this is evidence for citing the echinoderms as vertebrate ancestors.