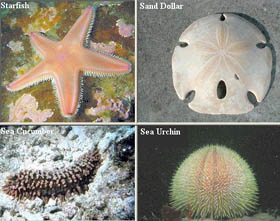 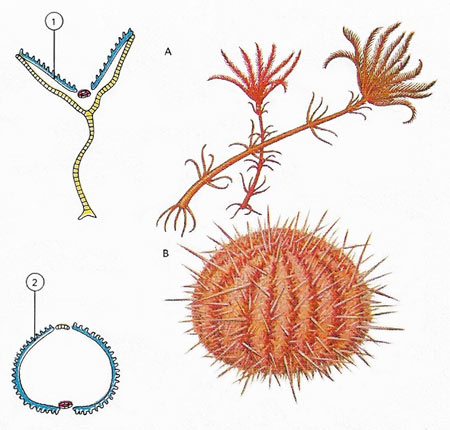 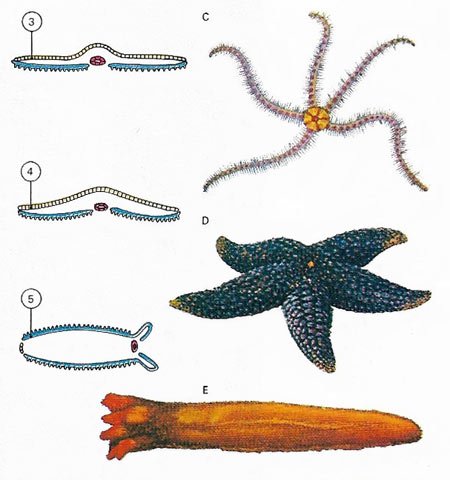 Fig 2. Echinoderms show a diversity in body shapes. The five groups – sea lilies (A), sea urchins (B), brittle stars (C), starfish (D), and sea cucumbers (E) – all have the same basic body plan (1–5), with a body pattern that has structures present in fives. They all possess locomotory tube-feet (blue) which are part of an internal system of canals filled with fluid, an external skeleton of calcareous plates embedded under the skin (yellow), and a mouth (red) to rake in food and sometimes to give out waste. 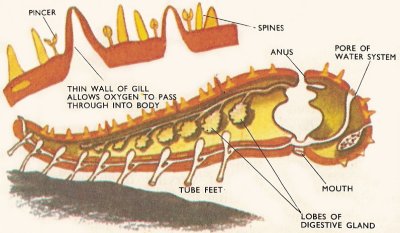 Fig 3. Section of a starfish disk and arm. The tube feet are used for movement in this way: they are extended by pumping water in and the suckers make contact with the rock. The muscles of the feet then contract and the combined suction of the many feet is sufficient to draw the animal forward. Insert: A section of the skin gills and the tiny pincers. 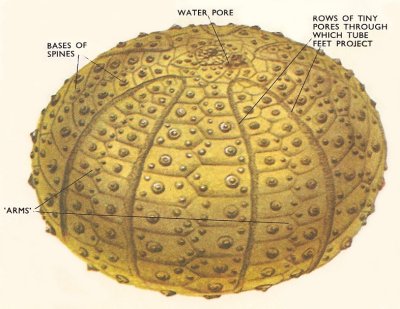 Fig 4. The test or skeleton of a sea urchin. The chalky plates are all joined together in a definite pattern for the species. The rows of tube feet pores on the "arms" are clearly visible. They show how a sea urchin may be regarded as a starfish whose arms have been drawn up to meet at the top.

An echinoderm is any member of the phylum Echinodermata (Greek, echino = spiny; derma = skin), which includes starfish (class Asteroidea), crinoids, or sea lilies and feather stars (class Crinoidea), sea urchins, heart urchins, and sand dollars (class Echinoidea), sea cucumbers (class Holothuroidea), and brittlestars (class Ophiuroidea). Echinoderms are marine invertebrates with an internal calcareous (calcium carbonate) skeleton and are often covered with spines. About 5,000 species are known. Fossil echinoderms include crinoids and blastoids and have a history extending back to the Ordovician Period, which began 500 million years ago.

Like cnidarians, echinoderms show a radial symmetry with the body parts arranged more or less regularly around a central point. There is no brain nor is there even any structure that can be regarded as a head. The nervous system is very simple and consists of networks with thicker strands around the mouth and along the arms or radii. Sense organs are poorly developed and special excretory systems and respiratory organs are lacking in most of these animals. There is a true coelom (i.e., a space separating the gut and internal organs from the muscles of the body wall). Tiny projections from the coelom reach the surface as skin gills. The skin is very thin and oxygen can diffuse in from the surrounding water. This is especially so in starfish.

A feature unique to these animals is the water vascular system. This is a system of water-filled canals which runs throughout the body. Tiny branches reach the surface and are known as tube feet. They are used for moving about and also aid in respiration. In general, the sexes are separate but a few species have both male and female structures in one individual. The sex cells are usually shed freely into the water where they join in pairs to produce young animals. These young are very unlike the adults, having a bilaterally symmetrical appearance. They are very different from most invertebrate larvae but some show striking resemblances to the larvae of Balanoglossus – a worm-like animal believed to be closely related to the ancestors of backboned animals. In spite of the seemingly primitive features, the echinoderms are very common and widespread animals. They exist at all depths in the seas and are known to have existed since Cambrian times, some 500 million years ago.

Living echinoderms are divided into five groups or classes of which the most familiar is the starfish group (class Asteroidea). These animals are flattened and normally have five arms radiating from the central disk (Fig 3). The mouth is underneath and so are the tube feet which occur along the arms. The skeleton is flexible and made up of numerous separate chalky plates. They are formed by and embedded in the dermis (lower layer of skin) and the skeleton is therefore an endoskeleton. Projections from the plates make the surface rough. Some projections develop into spines and tiny pincers called pedicellariae. The latter are on moveable stalks and pick up pieces of sand and dirt, thus keeping the surface clean. This is especially important around the skin gills. On the upper surface of the animal is a small perforated plate through which water flows into and out of the water system.

Starfish feed upon various molluscs and other sea-living organisms, and are often serious pests in oyster farms. Starfish use the suction of their tube feet to open the shells and then push out their stomachs over the mollusc. The partly digested food is sucked up and passes into the digestive glands in the arms. In this way, very little indigestible food is taken in and, in many species, an anus is absent.

These animals (class Ophiuroidea) are often confused with the starfish but are structurally quite different. The central disk is sharply separated from the arms and the latter do not contain digestive glands. The arms are used for moving but the tube feet play no part in this: they lack the suckers of the starfish.

The stomach cannot be everted and the animals feed on small prey captured by the arms or collected by pushing mud into the mouth. Spines around the latter help in feeding. There is no anus and any undigested food passes out again through the mouth.

This group (class Echinoidea) contains many species of globular animals which are without arms (Fig 4). The radial symmetry is maintained however and the tube feet occur in five rays around the body. The skeletal plates form a rigid shell (test) through which the tube feet pass. The latter end in suckers and, when not extended, nestle among long spines and many small pincers.

The skeleton is made up of numerous plates in well defined rows. The tube feet pores and the bases of the spines are all evident. Such structures are important in classifying urchins, especially the fossil ones of which there are many. The mouth is on the undersurface and is surrounded by a framework known as Aristotle's lantern. Attached to this are five strong teeth that project from the mouth. The animals feed chiefly on seaweeds and possess an anus.

In the animals of this group (class Holothuroidea) the skeleton consists merely of tiny scattered plates. The body as a while is leathery and, as the name suggests, elongated. Tube feet around the mouth are modified to form tentacles. As the animals lie on one side they show a superficial bilateral symmetry. Small creatures may be caught in the tentacles but food is usually obtained by scooping mud into the mouth, aided by a structure resembling the lantern of the urchins.

Sea lilies and feather stars belong to the class Crinoidea. Sea lilies differs from members of the other four groups of echinoderms in that they are attached to the seabed by a stalk. The mouth faces upward from the center of the cup or disk and is surrounded by a ring of arms. There are no spines and the tube feet have no suckers. Tiny hairs (cilia) cover parts of the arms and beat so as to cause a current of water to flow towards the mouth. This current carries food particles to the mouth. The crinoids and various related fossil groups were important in Paleozoic times and some Carboniferous limestones consist almost entirely of their remains.