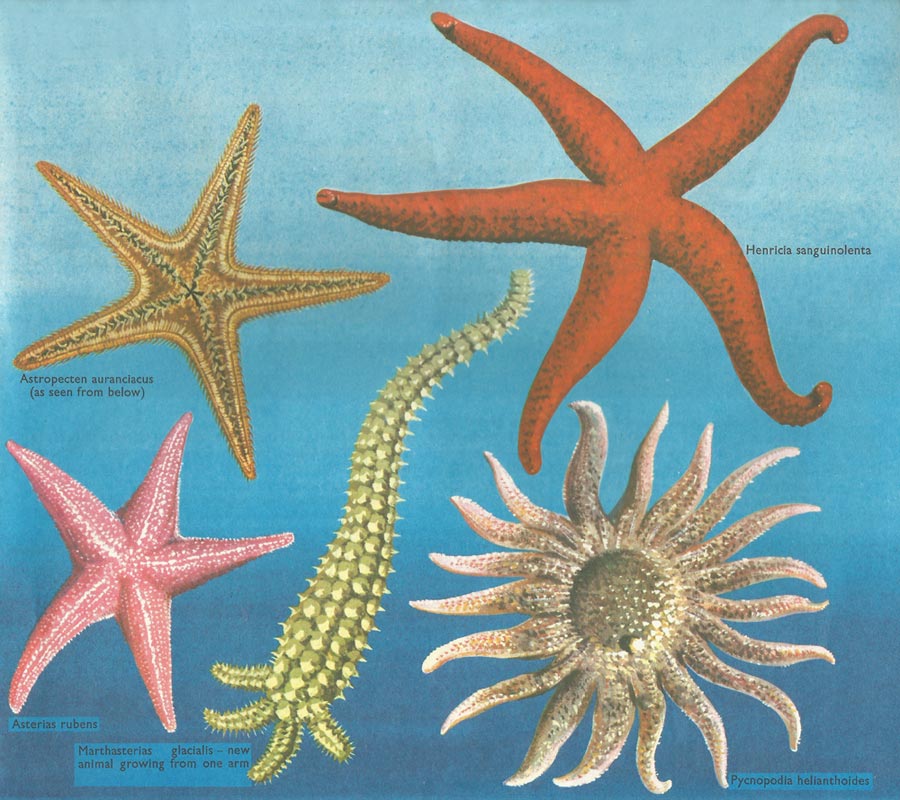 Astropecten auranciacus. A Mediterranean starfish with comb-like teeth or spines along the edges of its arms. Here it is shown upside-down, and its tube feet can be seen in the grooves that run along each arm. Henricia sanguinolents. A very handsome species with a beautiful, rich red color. It is fairly common in both sides of the Atlantic, and lives in deep as well as shallow water. Asterias rubens, common starfish. Most of the starfishes washed up on the shore belong to this species. They vary from orange to violet in color. Marhasterias glacialis, spiny starfish. A pale greenish or yellowish species, usually 8 inches to one foot across; its body is soft and covered with knobs and spines. It often throws off its arms when handled, and each arm may grow four new arms at its base, and so becomes a new starfish. The one show has just started this process. 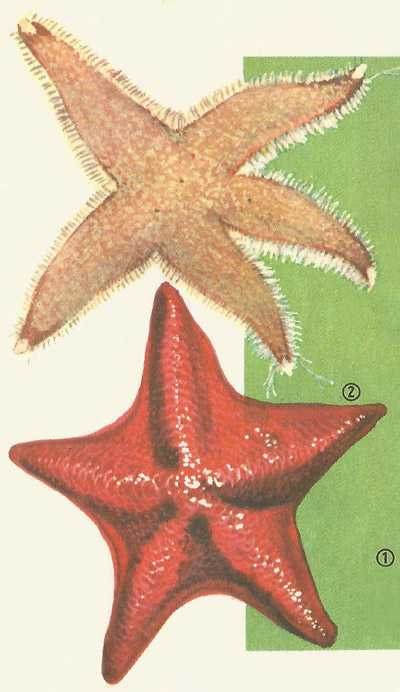 Part of te under-surface of a starfish, showing position of tube-feet. 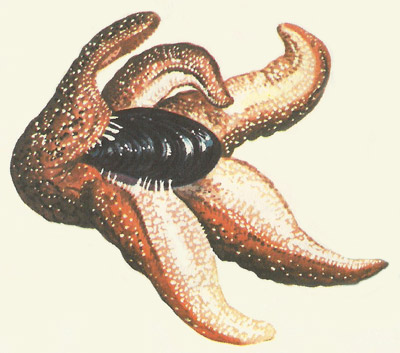 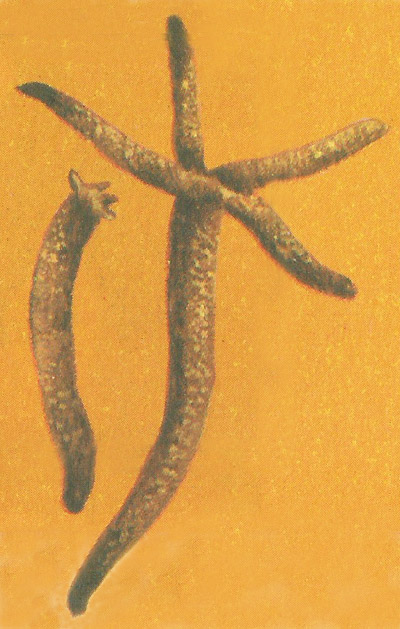 Besides Marthasterias glacialis , a number of other species have the power of regenerating a whole animal from one severed arm. In the early stages of this process the animal looks rather like a comet..

Starfish (class Asteroidea) are echinoderms usually shaped like a conventional star with five rays, although some kinds have more. In some species of starfish, each arm or ray, if broken off, will regenerate and grow into a new starfish.

Both starfish and sea urchins have skeletons made up of calcium carbonate embedded in their skin. Each plate is a complete crystal of the mineral; echinoderms are the only animals having 'bones' formed of crystals.

Their circulatory system is also strange becausetheir veins contain not blood but seawater. This 'water vascular system' consists of a main canal, forming a ring round the esophagus, which is connected by a tube to a perforated plate or madreporite on top of the animal. Water is drawn in through it from the exterior. Also branching out from the ring are five canals, from which many little tubes lead off to the exterior. These tubes end as suckers, and they are called tube feet, because the animal moves by them. It forces water through little sacs called ampullae into the tube feet, causing them to stretch; applies the suckers to the surface on which it is lying; and contracts the tube feet by withdrawing the water. Hundreds of tube feet acting in co-ordination cause it to glide along.

Their mouths are at the center of their lower surface and their madreporites on their upper surface, as in sea urchins. Their tube feet lie in open grooves, running along the lower surface of each ray. Their skeletons consist of plates or rods under their skin, but, unlike those of sea urchins, they are flexible and not rigid.

Starfish are predators, killing other animals for food, and their favorite victims are molluscs, such asmussels and oysters. The starfish drags the two halves of the mollusc's shell apart, and then puts its stomach out through its mouth and digests its victim's body.

Most animals, including ourselves, are made on a plan of bilateral symmetry – they can be divided into two more or less identical halves, a right and a left. In contrast, the echinoderms display radial symmetry – their parts are arranged around a central axis like the spokes of a wheel or the petals of many flowers. The normal number of radii or 'spokes' is five. This five-symmetry is shared by no other animals.