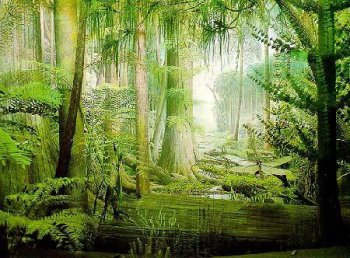 The term "Carboniferous" comes from England, in reference to the rich deposits of coal that occur there. These deposits of coal occur throughout northern Europe, Asia, and midwestern and eastern North America. The Carboniferous period is also notable for the first appearance of the amniote egg, which allowed for the further exploitation of the land by certain tetrapods. The amniote egg allowed the ancestors of birds, mammals, and reptiles to reproduce on land by preventing the desiccation of the embryo inside. There was also a trend towards mild temperatures during the Carboniferous, as evidenced by the decrease in lycopods and large insects and an increase in the number of tree ferns.