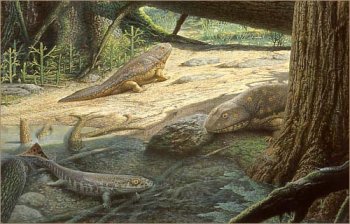 The Devonian period is the fourth oldest of the six periods of the Paleozoic era. The Devonian period spans the time between the Silurian and the Carboniferous, about 417 to 359 million years ago. During the Devonian, two major animal groups appeared on land: the first tetrapods, or land-dwelling vertebrates, and the first terrestrial arthropods, including wingless insects and the earliest arachnids. In the oceans, brachiopods, crinoids and other echinoderms, tabulate and rugose corals, and ammonites flourished, and many new kinds of marine and freshwater fish appeared, including jawless fish and forerunners of today's fish (the Devonian is sometimes called the Age of Fishes). The vegetation of the early Devonian consisted primarily of small plants, the tallest being only a meter tall. By the end of the Devonian, ferns, horsetails and seed plants had also appeared, producing the first trees and the first forests.