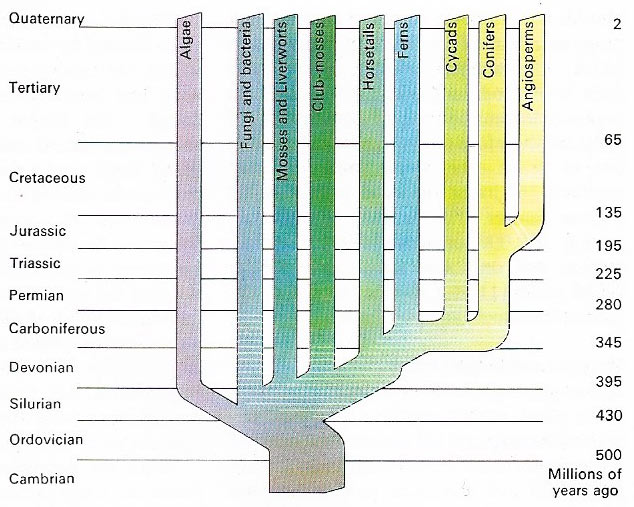 Fig 1. Plants have developed through the ages from simple unicellular algae to the complex flowering plants that exist in the world today. Fossil records have been found of most major plant groups. Although these records provide a broad outline of plant evolution, they do not give a complete picture. Because of the relative scarcity of plant fossils the relationships of the various plant groups are still open to debate. 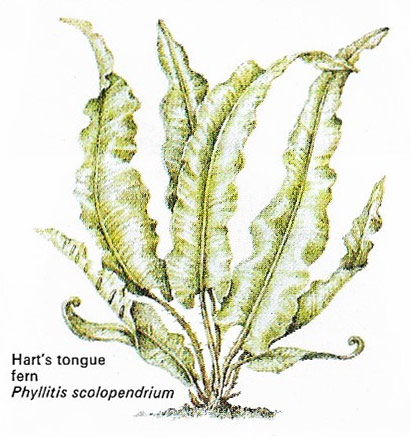 Fig 2. Ferns, unlike bryophytes, are mostly large plants. Anatomically they differ from bryophytes in having special water-conducting cells. They also have a region of growing cells – cambium – which allows the development of larger plants such as the tree-ferns of tropical regions. Ferns have an interesting life cycle. The typical fern plant such as this one is the asexual stage. It produces spores which grow into the small inconspicuous sexual phase. 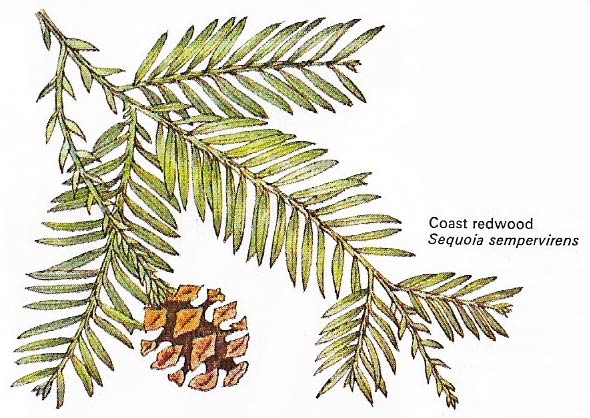 Fig 3. Gymnosperms are one of the two main groups of seed-bearing plants. They are the group bearing naked seeds and have naked ovules with two or more cotyledons. No gymnosperm has sepals or petals and each flower is unisexual. The largest class of gymnosperms is the cone-bearing conifers. The conifers are wind-pollinated and seed fertilization can be a complex process, taking many years for the development of the pollen, fertilization, and, finally, for the maturation of the seed. 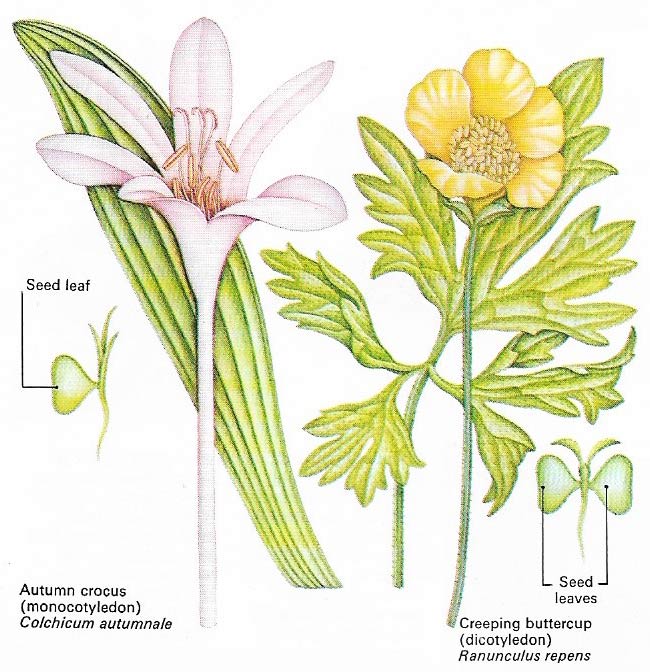 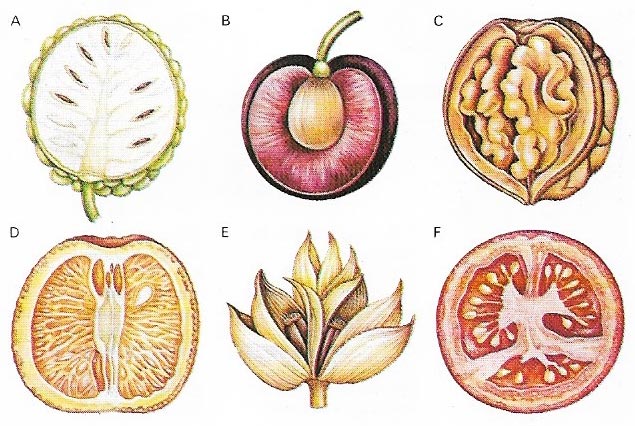 Fig 5. Angiosperm fruits show an evolutionary sequence from one ovary with many ovules, as in the sugar apple (Anona sp) (A), to an ovary with one ovule, as in wheat (Triticum sp) (E), or a number of ovaries with many ovules, as in the tomato (Lycopericum sp) (F). The cherry (Prunus) (B), walnut (Juglans sp) (C), and orange (Citrus sp) (D) represent intermediate stages with one ovary and ovule or many ovaries and one ovule.

Fig 6. Flowers contain the sex organs of higher plants. Some, such as the buttercup (Ranunculus sp) (A), have large petals (1) and honey-guide markings (2). A flower-plan is shown (3). Daisy family flowers comprise a number of florets (small flowers). In corn-flowers (Centauria sp) (B) these are central and fertile (4) or sterile and marginal (5). Poplar (Populus sp) (C) has small, open male (6) or female (7) flowers.

The plant kingdom, Plantae, includes organisms that vary enormously in appearance and size, from tiny mosses to giant trees. Despite this great variety, all plants have certain things in common. Most significantly, they are made of multiple, eukaryotic cells that are bounded by cell walls, and they are capable of photosynthesis.

Vascular plants, of which about 300,000 species are known, include the angiosperms (flowering plants, Fig 4), gymnosperms (such as the conifers, Fig 3), clubmosses, horsetails, and ferns (Fig 2).

Historically, the plant kingdom included all organisms that were not animals; however, this is no longer the case. In particular fungi are now considered to be a separate kingdom and most algae, as well as the prokaryotes, including the archaea and bacteria, are placed in different taxonomic branches from plants. By one definition, plants form the clade Viridiplantae (the Latin name for "green plants"), a group that includes the flowering plants, conifers and other gymnosperms, ferns and their allies, hornworts, liverworts, mosses, and the green algae, but excludes the red and brown algae.

The plants first appeared in the Ordovician, but did not begin to resemble modern plants until the late Silurian. By the close of the Devonian, about 360 million years ago, there were a wide variety of shapes and sizes of plants around, including tiny creeping plants and tall forest trees (Fig 1).

The possession of chlorophyll, the green photosynthetic pigment, is probably the most important distinction between plants and animals, but there are several other differences. Plants are stationary, have no nervous system, and the cell wall contains large amounts of cellulose. Some insectivorous plants obtain their food by trapping insects.

Although the more primitive plants vary considerably in their overall structure, the higher planets (gymnosperms and angiosperms) are much the same in their basic anatomy and morphology. In a typical angiosperm, four main regions can be recognized: root, stem, leaf, ad flower. Each region has one or more basic functions.

When examined under the microscope, a piece of plant tissue can be seen to consist of tiny cells, generally packed tightly together. The cells are not all alike and each one is adapted to do a certain job. All are derived, however, from a basic pattern. This basic plant cell tends to be rectangular and has a tough wall of cellulose which gives it its shape, but the living boundary of the cell is the delicate cell membrane just inside the wall. Inside the membrane is the cytoplasm, which contains the nucleus, the chloroplasts, and many other microscopic structures. In the center of the cytoplasm is a large sap-filled vacuole, which maintains the cell's shape and plays an important part in the working of the whole plant.

Many plants have two forms, one sexual, the other asexual or vegetative. This is known as alternation of generations. In the simplest plants the sexual form is dominant but in land plants, especially, there has been a shift in emphasis to the asexual phase, culminating in the flowering plants where the sexual phase is reduced to a few cells.