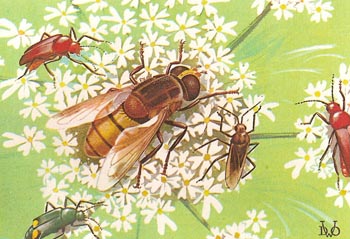 Fig 1. The small open flowers of the hogweed attract many types of insect which effect pollination. 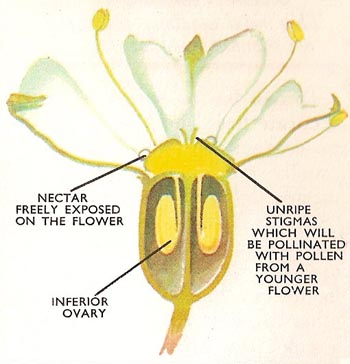 Fig 2. A single flower of the hogweed in section. 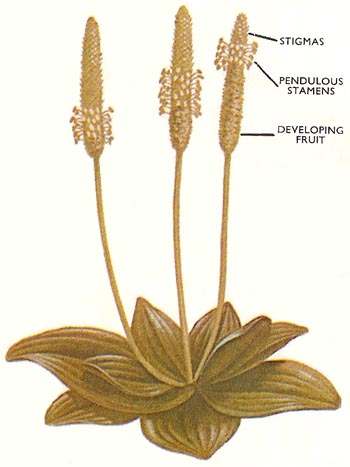 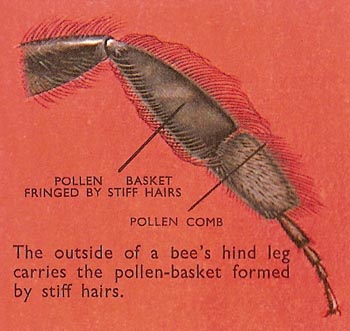 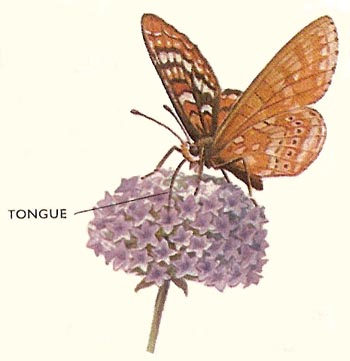 Fig 5. The butterfly's long tongue probes the tubular flowers of the scabious. Tongue and legs all collect pollen. 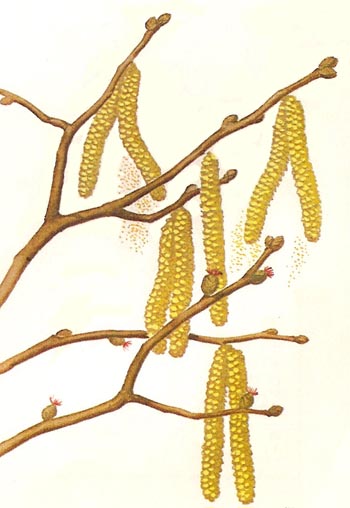 Fig 6. Hazel catkins swaying in the wind scatter pollen onto the red stigmas of the female flowers. 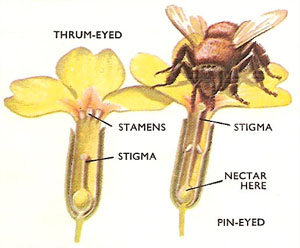 Fig 7. The primrose. This flower exists in two different forms – "pin-eyed" and "thrum-eyed." Each plant has only type of flower. The difference depends upon the position of the stamens and the length of the style. Primroses are pollinated mainly by long-tongued bees whose tongues pick up pollen at the right level to transport it to the stigma of the opposite type of plant. 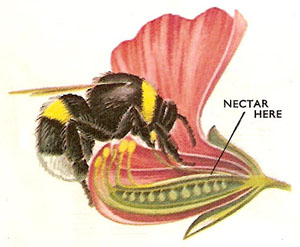 Fig 8. Irregular flowers. Flowers of this type (e.g., sweet pea) are highly specialized to ensure pollination. Long-tongued bees are attracted to the flowers and settle on the side-petals (wings). The weight of the bee depresses the petals and exposed the sex organs which brush against the insect and pollination is effected as the bee probes for nectar in the base of the flower. Only heavy insects such as bees can pollinate these flowers. 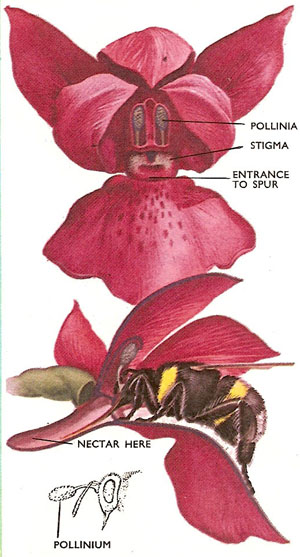 Fig 9. Orchids. Some of these flowers show the most remarkable adaptations to pollination by certain insects. The likeness of some of the flowers to insects is regarded as a pollination mechanism because it attracts insects to the flower. The flower of the early purple orchid has only one stamen whose anthers are large and contain a sticky mass of pollen (the pollinium) attached to a stalk. When a bee alights on the flower and attempts to get nectar from the spur the pollinia stalks stick to its head and within a short time the pollinia bend forward. They are just in the right position to strike the stigmas of the next plant visited. Flowers of this type are so specialized that only one species of insect may be able to pollinate them.

Fig 10. The cuckoo-pint. This inflorescence is rather dingy and has an unpleasant odor which is, however, attractive to flies. The individual flowers are borne on a spike, the female flowers below the male ones. Above the flowers is a ring of hairs and the whole spike is sheathed by a bract. Flies, attracted by the odor, crawl down the tube and become trapped below the downward pointing hairs. The female flowers ripen first and are pollinated by insects with any pollen on. Then the male flowers ripen and the hairs wither. As the insects escape they gather pollen which they will transfer to the next flower.

Pollination is the transfer of pollen from an anther to a stigma. It is the first stage in the process whereby the male cells of a flowering plant gain access to the female egg-cells in order to form seeds. The second part of the process is fertilization.

All parts of the flower may play a part in pollination but the main organs are the stamens and the stigma (Fig 2) Each stamen (male organ) consists of a filament and a pair of anthers which are the pollen-producing sacs. When the pollen grains are ripe the anther walls split and expose them. The stigma is the receptive surface of the female part of the flower – the carpel. The stigma may or not be on a stalk – the style. When pollen of the same species falls upon the style the process of fertilization begins.

When seeds are produced after the transference of pollen from one flower to another (cross-pollination), the resulting plants are often stronger than if the pollen and ovule (egg-cell) had both come from a single flower (self-pollination). It is not surprising, therefore, that most flowers have some way of avoiding self-pollination and encouraging cross-pollination. Those flowers which are adapted to ensure cross-pollination will produce stronger and more successful offspring which in turn will be adapted for cross-pollination. Most flowers contain both stamens and carpels (they are hermaphrodite) but a number of plants have flowers of one sex only. A few species (e.g., the willow) even bear the male and female flowers on different plants. In these cases self-pollination is impossible. Where there are organs of both sexes in a flower, self-pollination is avoided by separating the anthers and stigmas in space or time. In an upright flower the anthers may be below the stigmas and vice versa in a hanging flower so that pollen will not fall on the stigmas. The most frequent device is that whereby the stamens ripen before the stigma is ready to receive pollen. This is known as protandry. The reverse condition (protogny) occurs in some flowers whose stigmas mature before their stamens shed any pollen. A number of plants whose flowers are not structurally adapted to prevent self-pollination are called self-sterile. The pollen can fall on the stigma but it cannot fertilize the ovule because there appears to be a chemical barrier to its further development.

Although cross-pollination is preferable, self-pollination is better than no pollination at all and in many cases the stamens and stigmas bend towards each other before the flower dies so that self-pollination may occur if cross-pollination has failed. A number of plants (including the sweet violet) produce special flowers late in the season which always pollinate themselves – in fact they do not even open; the pollen passes direct from stamen to stigma and ensures that at least some seed will be produced.

Although insects are the most important agents of pollination, there are others, notably the wind.

Wind pollination (anemophily) occurs in many trees and all grasses. The flowers are typically borne in catkins or the stamens are provided with long filaments. In both cases even slight air movements release pollen. The pollen is light and produced in large quantities for wind pollination is wasteful – very little reaches the female stigmas. The latter are usually large and feathery in wind-pollinated plants so that the maximum amount of pollen may be trapped. Petals of wind-pollinated flowers are often absent and the flowers are normally inconspicuous although well exposed. The hazel tree produces its male flowers in hanging catkins. The female flowers are tiny structures with branched red stigmas. Separation of the flowers in this way ensures cross-pollination. Grass flowers have very long filamentous stamens which hang well below the stigma and thus risk of self-pollination is reduced. Plantains produce spikes of protogynous flowers (Fig 3). The lowest flowers open first and expose their stigmas. As the latter wither, the hanging stamens appear, but these rarely pollinate the younger flowers on the same spike since the stamens are always below the stigmas. Wind pollination is undoubtedly the most primitive mechanism.

Insect pollination (entomophily) is by far the commonest method of pollen transference). Many flowers are unspecialized and can be pollinated by almost any insect, but the more specialized flowers can be pollinated by only a few species of insect. The elaborate associations between flowers are insects are not coincidental. They are the results of evolutionary forces which have been acting ever since insects first began to feed at flowers.

The early wind-pollinated flowers must have been attractive to insects in some way – probably on account of the large amount of pollen they produced, for pollen has a high food value. Those flowers which were visited regularly by insects would have been pollinated efficiently and would have produced offspring in larger numbers than the wind-pollinated plants. These offspring too would have been attractive to insects, and from this stage the many refinements of insect-pollinated flowers must have arisen. The insects too have evolved special structures which enable them to gather pollen and nectar (and therefore to pollinate) more efficiently. The "pollen basket" and the fine feathery hairs of honey bees illustrate this.

Entomophilous flowers are usually brightly colored and scented. They normally contain a sweet liquid – nectar – as well as pollen, but some flowers (e.g., dog rose) are "pollen flowers" – they produce extra pollen as insect food but no nectar. The pollen of entomophilous flowers is sticky and adheres to the bodies of insects. Because of the more efficient pollination mechanism less pollen is produced than in the wind-pollinated flowers.

Bees are the most pollinating insects (Fig 4). In their search for pollen and nectar they visit large numbers of flowers – usually all of the same species – and pollinate them. The relatively long "tongue" (proboscis) of bees enables them to find nectar which is concealed (e.g., in spurs formed by petals). Bees visit flowers which are blue, purple, yellow, and sometimes white but rarely visit red flowers. Experiments have shown that the insects are attracted by color from a distance and then by both color and scent when they are close to the flower. The dark lines on flowers, called honey guides, are believed to guide the insect to the nectar and the stamens and stigma.

Butterflies and moths are also important pollinating agents (Fig 5). Butterflies visit all types of flower, chiefly red and white ones. Their long tongues can reach nectar in tubular flowers. Night-flying moths hover in front of flowers and reach the nectar with their very long tongues. The flowers are usually white or yellow (so that they are easily seen in the dark) and strongly scented (e.g., honeysuckle). Their stamens and stigmas protrude from the flower, touching the hovering moth.

Other insects which frequently visit flowers include flies and beetles. These are not specialized for reaching concealed nectar and are normally found on "open" flowers such as those of the family Umbelliferae (e.g., hogweed). Heads of flowers are frequently covered with insects which feed upon the exposed nectar. The flowers are markedly protandrous and the insects transfer pollen from the younger flowers in the center of the head to the outer, older flowers whose stigmas are ripe. Flowers of the family Compositae are also visited by various kinds of insect. Most entomophilous flowers employ one of the methods described above to avoid self-pollination.

Water carries pollen of some aquatic plants. The pollen grains have tiny floats which carry them along the surface until they reach a flower at the surface of water. Birds are common agents of pollination in the tropics (e.g. hummingbirds). The flowers are usually red and produce large amounts of nectar.

Bats may be pollinators of some flowers, again especially in the tropics. Other animals may effect pollination during their wanderings but they are not regular pollinators.


Examples of pollination in flowers