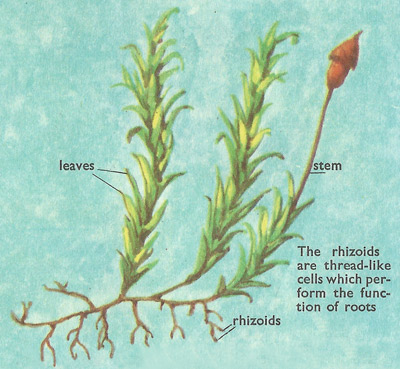 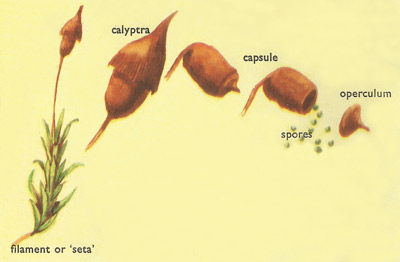 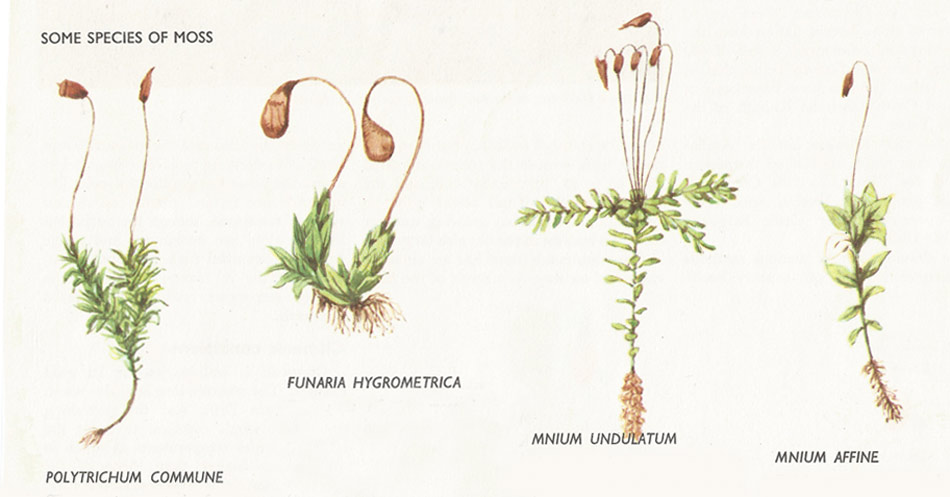 Fig 5. A variety of species of moss.

A moss is any of about 14,000 species of small, simple, non-flowering green plants of the Bryophyta division (see bryophyte), class Musci, which typically grow in colonies, often forming dense carpets. Each moss plant consists of an erect stalk to which primitive 'leaves' are attached. The plants are anchored by root-like rhizoids (Fig 1). Mosses are distributed worldwide and are usually found growing on soil, rocks, and tree trunks in woods and other damp habitats. They are often early colonizers of bare soil and play an important role in preventing soil erosion. Sphagnum debris is an important constituent of peat.

Mosses reproduce by means of spores produced in a capsule on the stalk. The spores germinate into branching filaments, from which buds arise that grow into moss plants.

Mosses vary in growth and color according to species (Fig 2). Fontinalis anti pyretica (A) is an aquatic moss, whose boat-shaped leaves have a sharp keel (1); the capsules are oblong or cylindrical (2, 3) and there is a pointed cap (4). Polytrichum commune (B) is extremely common and has a capsule (5) that looks like a four-sided box. It bears a long, golden brown cap (6) which is released before the spores are dispersed. Atrichum undulatum (C) is common on heaths and in woods, and has a capsule (7) with a long, pointed cap. Schistostega pennata (D) has flattened, translucent leaves.

The beauty of the woodlands is not only to be found in the large trees and bright flowers which grow there. Look closely and search carefully in the darker and damper parts of the woods to discover beauty among the lower plants, the so-called cryptogams, which have no flowers.

The most conspicuous of these are the mosses, and it is interesting to find the ground or stones or tree-stumps carpeted with a thick, green covering of moss. Rough, uneven surfaces are smoothed out and made cool and soft to touch.

One of the reasons mosses are important is their capacity to absorb rainwater, to act in the same way as a sponge. Experiments have shown that a square yard of the Palm Tree Moss (Mnium undulatum) can hold between four and five pints of water when it is saturated. In a large area of hill or mountain forest enormous quantities of rainwater are absorbed by moss and so prevented from rushing down the slopes. This saves the humus from being washed away and reduces the hazard of landslides; it also lessens the danger of flooding in the lowlands by spreading the run-off of water from the hills over a longer period.

If we break off a fragment of moss and examine it we can see that it consists of numerous little plants formed of stems, leaves, and root-like organs which are called rhizoids.

In botanical nomenclature mosses are called Musci and are classified, together with the Liverworts or Hepaticae, in the division Bryophyta. In this division the plant body, or thallus, is far less highly differentiated than in the higher plants, and the thread-like rhizoids take the place of roots. The method of reproduction is also peculiar to the division.

Let us examine the reproductive processes of a Polytrichum (Fig 3 and 4). In the summer each stem produced forms a filament with a little capsule at the top.

1. The capsule is covered by a little pointed lid, the operculum, over which is a hood-like structure, the calyptra. Inside the capsule are numerous minute grains called spores. When these ripen the capsule bends over, the calyptra and operculum fall off and the spores are scattered by the wind.

2. If the spore falls on suitable ground it will germinate the following spring and produce branched filaments called protonema from which grow tiny shoots with 'rosettes' of leaves.

3. These shoots are of two kinds; some produce microscopic cells which can swim actively in water; others produce cells which are adapted to receive the active cells. In wet weather, when the moss is soaked with water, the active cells swim across and fertilize the others, entering a special little receptacle to do so.

4. Out of each shoot that has been fertilized grows a filament on which develops a capsule full of spores and the cycle repeats itself.

We see here a very primitive form of sexual reproduction; one reason why mosses grow in wet places is the need for a film of water in which the active or 'male' cells can swim.


Some species of moss

A larger species of moss, common in pine woods.

The setae of this moss have distinctive characteristics: in dry weather they are curled and twisted, and they uncurl in response to moisture. The name 'hygrometrica' means an indication or measure of humidity.

A beautiful moss with leaves large enough to be easily visible. The setae are in groups, several to a shoot.

Fairly common in marshes and damp places in woods. It is bright green in color.

Why is it that the little plants of which mosses consist never grow separately but always clustered together? The reason is that if they are densely crowded to form compact cushions they can conserve the water which they absorb when it rains. As we have seen, these plants have no real roots to penetrate the soil or the crevices in rocks and find deep-seated moisture. Their rhizoids can only absorb water which is on the surface. If they were not closely crowded this would quickly dry up.

They are, however, very resistant to drought. After a long dry spell you will see mosses on walls that are dry and yellow and apparently dead. But the first shower of rain is enough to turn them green again and start them growing actively.

Luminous moss is one of the most fascinating of all plants (Fig 6). It grows in dark, damp places such as caves or tunnels, or even just inside a rabbit burrow. In the dimness it glows with a weird and beautiful light. If you try to touch it there seems to be nothing there. This moss is called Schistostega pennata. Tiny cells in the moss collect the little light that reaches them. The moss then uses the light to produce food by a process called photosynthesis. But the light has to pass through the cells in order to reach the chloroplasts which perform photosynthesis. As it passes through the cells, the light is refracted, or colored and multiplied, thus causing the glow you see.

Of course, the moss is not really luminous; in total darkness it would be invisible.

Some mosses of the genus Grimmia grow in high altitudes in the mountains, covering the rocks with blackish cushions. In the Alps they are found as high as 15,000 feet.