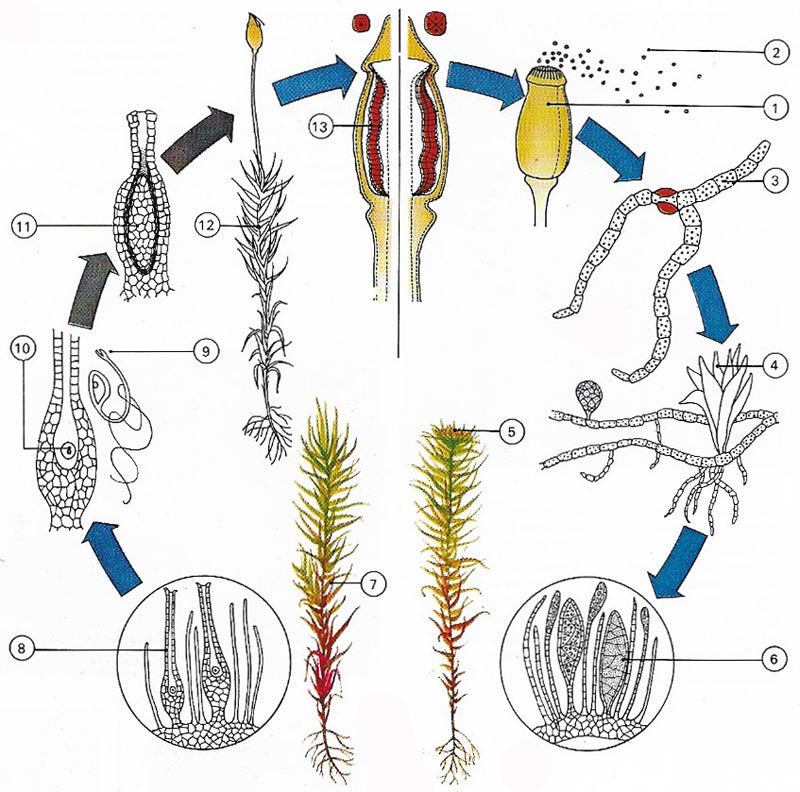 Fig 1. The life cycle of a moss, Polytrichum, begins with the dispersal of the tiny spherical spores by a censer mechanism through gaps in the teeth guarding the apex of the capsule (1). The spores (2) germinate to form a branched filament, the protonema (3). The upper parts turn green and buds appear on those filaments that grow into a plant (4). Mature male (5) and female (7) Polytrichum plants are similar. Male sex organs (6) are borne in a flower-like open cup at the shoot apex. Female sex organs (8) are borne in a cluster, also at the shoot apex. Male sperms (9) swim from male to female plant and fertilize the egg (10). This develops into an embryo (11) that gives rise to the moss sporophyte generation. The sporophyte borne on the female (12) has a capsule holding spores (13) produced by meiosis. 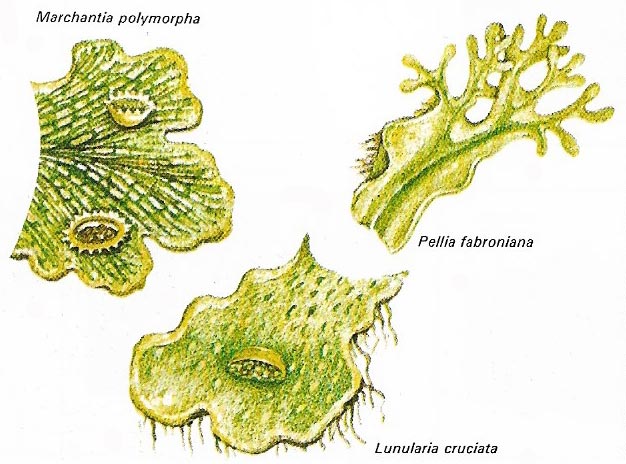 Fig 2. Dispersal units, gemmae, enable mosses and liverworts to regenerate entire adult plants vegetatively from small pieces of plant tissue. Gemmae may be spherical or platelike and are borne in small cups or envelopes on the thallus surface. Marchantiaem produces large disk-shaped gemmae, while those of Lunularia are biconvex and just visible to the naked eye. In Pelllia, the shoots and the margin of the thallus separate to form new plants. 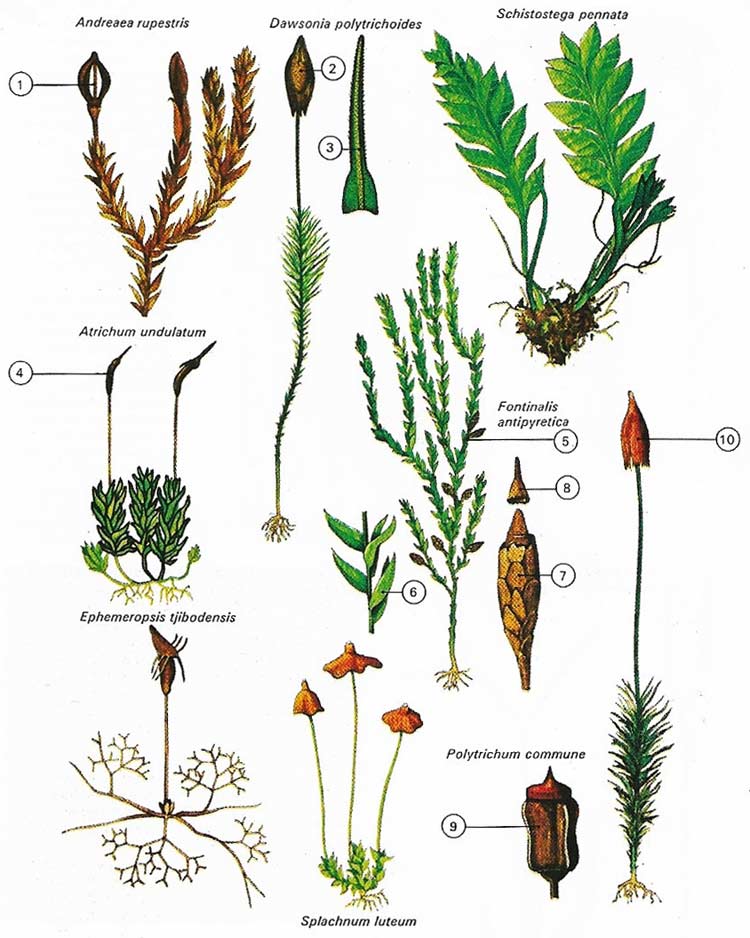 Fig 3. Mosses vary in growth and color according to species. Andreaea rupestris is dark reddish-brown with tiny capsules (1) that open by four longitudinal slits. Dawsonia polytrichoides is an Australian species with a distinctive capsule (2) and thin, pointed leaves (3). Schistostega pennata, a European moss, has flattened, translucent leaves. Atrichum undulatum is common on heaths and in woods, and has a capsule (4) with a long, pointed cap. Fontinalis antipyretica is an aquatic moss (5) whose boat-shaped leaves have a sharp keel (6); the capsules are oblong or cylindrical (5, 7) and there is a pointed cap (8). Ephemeropsis tjibodensis has an extensive protonema, while the mature plant is small. Splachnum luteun has a spore-producing body that resembles an umbrella. Polytrichum commune is extremely common and has a capsule (9) that looks like a four-sided box. It bears a long, golden brown cap (10) which is released before the spores are dispersed. 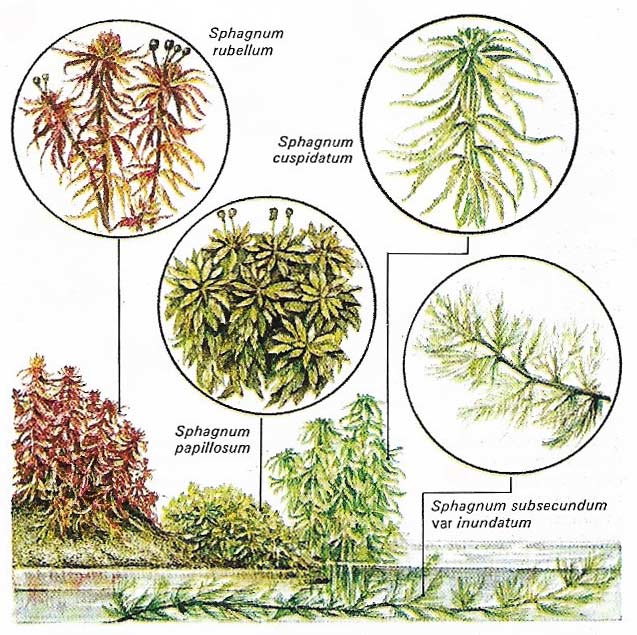 Fig 4. The pear mosses (Sphagnum spp) can absorb and retain enormous amounts of water – over 25 times their own dry weight. They can reproduce asexually extremely efficiently by separating off branches. As a result, open stretches of water that are colonized by Sphagnum species are drained by the ever encroaching moss, while the level is raised by dead and decaying moss tissue accumulating on the surface. At an early stage in the formation of a peat bog, the water surface is covered with a dense mat of Sphagnum and other species, forming a treacherous "quaking bog". These bogs are capable of eventually of supporting large trees and in time the swamp is entirely replaced by woodland.

A bryophyte is any member of the phylum Bryophya – small, green, rootless, non-vascular plants, including mosses (Musci), liverworts (Hepacticae), and hornworts (Anthoceratae), i.e., the most primitive of the green plants. Bryophytes grow on damp surfaces exposed to light, including rocks and tree bark, almost everywhere from the Arctic to the Antarctic. They have a characteristic life cycle in which the gametophyte is dominant and the sporophyte is attached to and dependent on the gametophyte for nutrition. About 24,000 species of bryophytes are known, including 14,000 species of mosses and 8,000 species of liverworts, the majority of both groups being tropical.


The structure of bryophytes

It is generally assumed that the bryophytes evolved from green algae and they still retain many primitive features that betray this ancestry. Mosses and their allies are structurally very simple. Some bryophytes bear a superficial resemblance to flowering plants but although they appear to have stems, leaves, and roots these structures are much simpler than in higher plants. Liverworts are so called because they are often roughly liver-shaped and in the Middle Ages were reputed to be good for liver disease.

Leafy liverworts, such as Lophocolea, a common liverwort found on damp logs and tree stumps, display "leaves" carried on a central "stem". In the mosses, this adaptation is taken a step further, and the thallus shape is lost completely.

The differences between mosses and leafy liverworts can be seen externally. The leaves of liverworts never have a central midrib and are nearly always in two or three rows. Moss leaves are never divided in shape and are rarely in more than one row. The rhizoids – the fine hair-like structures that root the plant in the soil and absorb nutrients – are made up of a single cell in the liverworts, but have many cells in the mosses. They also differ in the shape and the capsule – the spore-containing structure – and in the way that the spores are dispersed. In liverworts, the capsule is oval or spherical and the spores when mature are dispersed through four longitudinal splits which develop in the capsule wall. In mosses, the capsule is usually cylindrical and often has a lid that is shed when the spores are mature, exposing a circle of "teeth" round the open "mouth" (Fig 1).

Unlike higher plants, most bryophytes have no specialized cells to conduct water and food round the plant (some mosses are an exception), nor do they possess woody tissues which could support a large body. Thus all bryophytes are comparatively small.


The need for water

Despite all these primitive features, bryophytes show significant adaptations to life on land compared with their algal ancestors, which are nearly all confined to water. The most significant adaptations to the land habit is a pattern of alternation of generations in which plants producing sexual organs are dominant and the plants producing asexual spores are virtually parasitic on the dominant form (Fig 1).

Alternation of generations is the rule in virtually all plant species. It implies that there are two distinct stages in the plant life cycle, one which has only cone complete set of chromosomes and another, formed as a result of sexual reproduction, which has two sets of chromosomes, one from each parent. In the algae, both generations may look identical, but in the bryophytes each is distinct.

The reason for separate generations is that bryophytes need water for sexual reproduction. The male sperm must swim – using two whip-like flagella – to the female egg. Because the male reproductive organs and the female reproductive organs may be borne on separate plants, there has to be an unbroken film of water extending from the male organs to those of the female. On land, this occurs only during rainfall or after a heavy dew, so the evolution of sexual reproduction was more risky and less dependable as a means of colonizing new environments. The bryophyte answer was to find a way of making each mating much effective; the fertilized egg became not a mature bryophyte plant but a super-producing organism, or sporophyte, dependent on the mature plant for its food. Each of the thousands of spores produced as a result of one mating could give ruse to a new plant.

In both mosses and liverworts, the sporophyte consists of a foot embedded in the tissues of the bryophyte plant. This foot usually develops a long stalk and a capsule which contains and disperses the spores. Anthocerosem, the hornwort, is distinct from all other bryophytes because its spore-producing structure consists of only a foot and a capsule.

Bryophytes can also reproduce vegetatively, often from small detached fragments. Many have developed specialized deciduous shoots or groups of cells called gemmae from which the entire adult can regenerate (Fig 2).

Sphagnum (Fig 4), the moss of the peat bogs, is another atypical bryophyte as well as being the only one which is of any commercial importance, being widely used in horticulture. Because it is able to soak up and retain large amounts of water it can be used as a surface mulch for water conservation. Dried and partially decomposed it may be added to heavy clay soils to improve their texture. Peat is dug and burned as a fossil fuel in some parts of northern Europe. Bryophytes also play a significant role in soil ecology. They prevent erosion and retain surface water, and they help to break down rocks to soil.

Bryophytes, however, are believed not to have given rise to any other plant groups.