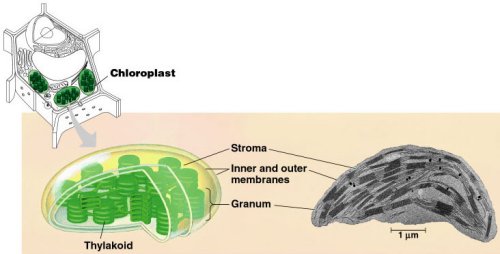 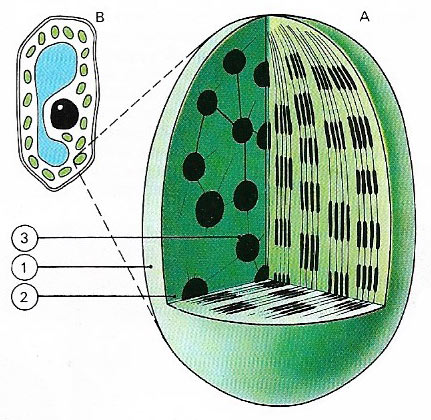 Fig 2. A single chloroplast (A), typical of those found in the palisade layer of cells (B) of a land plant, is contained in a membrane (1). Its interval structure comprises a series of minute plates called lamellae, each a few molecules thick. Chlorophyll molecules are found chiefly on these membranes in areas called grana (3). Between the grana is a granular mass called the stroma (2).

A chloroplast is an organelle found within the cells of green plants and eukaryotic algae which contains the membranes, photosynthetic pigments (notably chlorophyll), and enzymes necessary for photosynthesis.

A chloroplast is lens-shaped and variable in size though typically about 5 microns long. It has an inner and outer membrane, as well as a third membrane-bound sac called the thylakoid. Stacks of thylakoids, known as grana, are where the Light Reactions of photosynthesis take place. These are the reactions involved in the absorption of light energy and its conversion to chemical energy. The cytoplasm of the chloroplast is called the stroma, and is where the Light Independent Reactions (see carbon fixation) occur. These are the reactions in which chemical energy is used to reduce carbon dioxide and form carbohydrates.

Chloroplasts don't occur in photosynthetic bacteria, thylakoids lying free in the cytoplasm, many per cell, varying in arrangement and shape in different forms – vesicular, tubular, lamellate, or irregular.


Differences between chloroplasts in higher plants and algae

In higher plants, chloroplasts are usually disk-shaped, arranged in a single layer in the cytoplasm, and change shape and position in the cell in relation to light intensity. In algae, chloroplasts are cup-shaped, spiral stellate, or in the form of a network, one to several per cell, often accompanied by pyrenoids. Also in algae, grana do not occur and the thylakoids traverse the stroma of the chloroplast as a whole, roughly parallel to each other.