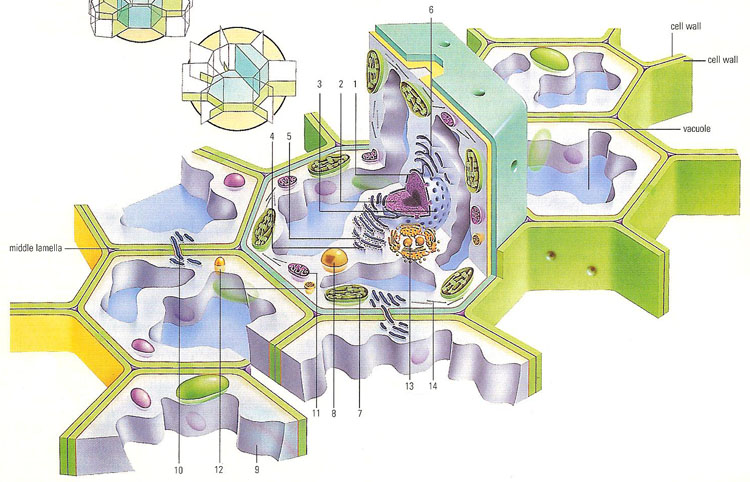 Cross section through a plant cell and surrounding cells. The most prominent feature is the nucleus (1), which contains the cell's DNA, normally arranged in thin strands called chromatin (2). Messenger molecules copied from the DNA pass through pores in the nuclear membrane (3); they then attach themselves to ribosomes (4), where they direct the synthesis of new cell proteins. Ribosomes are anchored to parallel membranes – the endoplasmic reticulum (5) that forms a maze-like network in the cell. Endoplasmic reticulum may lack ribosomes, in which case it is called smooth endoplasmic reticulum (6). Plant cells additionally contain chloroplasts (7) and enzyme-containing microtubules (8). The solution of biological molecules outside the nucleus is the cytoplasm (9), which is connected to adjacent cells by plasmodesmata (10). Mitochondria (11), lysosomes (12), and Golgi bodies (13) are common to all cells, as are the microfilaments and microtubules (14) that form the cell's internal skeleton 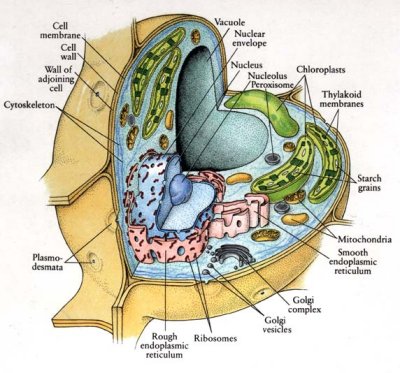 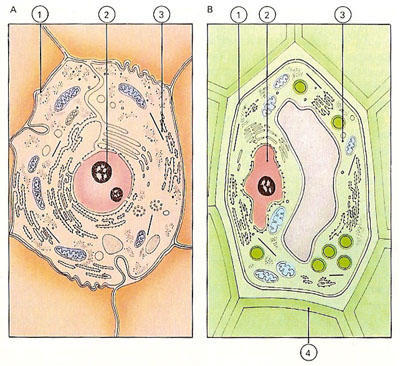 Comparison of animal and plant cells. Both animal (A) and plant (B) cells have a cell membrane (1), nucleus (2), and cytoplasm (3). But in plants there is also a cell wall (4) and certain organelles, notably chloroplasts, which are unique to plant cells.

Plant cells come in wide variety of shapes and sizes, and not all contain every feature of described below. However, they all are surrounded by an inflexible cell wall, made of cellulose, on the outside of the cell membrane. The earliest plant cells are thought to have formed more than a billion years ago, when cells that fed on the nutrients in the oceans at that time were colonized by bacteria capable of photosynthesis.

Plastids: a group of organelles characterized by a double membrane envelope and a complex of internal membranes. Plastids contain DNA and replicate autonomously. Among the types of plastids are:

• Anthocyanins: red, blue or purple pigments that are water soluble

• Tannins: phenolic compounds that bind with protein; they function in plant defense

Casparian strip: a band of suberin within the anticlinal walls of endodermal and exodermal cells

Cuticle: a water-repellent layer that coats the outer cell walls of the epidermis on aerial parts of plants, composed of cutin with a surface coating of wax

Polysaccharide: a polymer composed of sugars. Important polysaccharides in plant cells are:

• Cellulose: the structural (microfibrillar) portion of the plant cell wall

• Hemicellulose: the alkali-soluble portion of the cell wall matrix

• Pectin: the hot-water-soluble portion of the cell wall matrix

Plasmodesmata: cytoplasmic channels lined with plasma membrane that connect the protoplasts of adjacent cells across the cell wall

• simple pit: a pit that is not bordered, may be round or slit-shaped
• circular-bordered pit: a round pit with a thickened margin