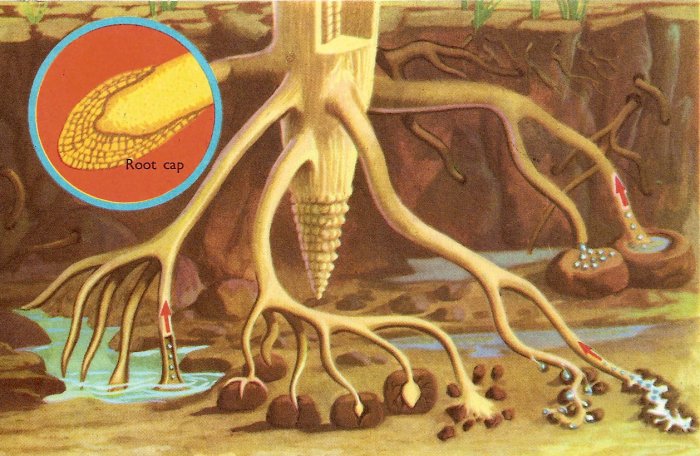 A plant root in action. Rootlets bury into the earth, absorbing, by osmosis, water and the mineral substances dissolved in it. 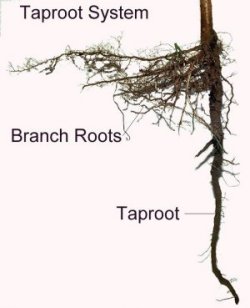 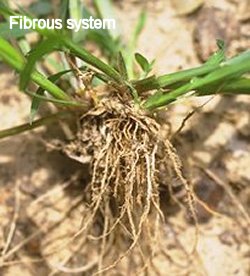 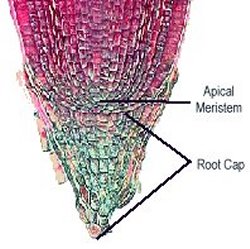 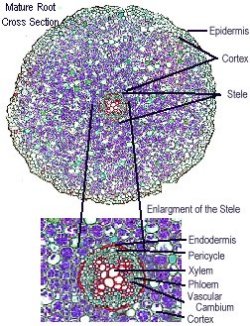 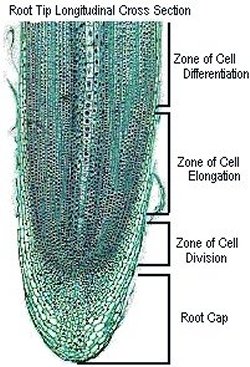 Plants, unlike the majority of animals, remain fixed in one place absorbing food from their environment. Roots play an important role in this way of life. They serve as organs of attachment, anchoring the plant to the ground, and also as organs of absorption and transport for water and dissolved salts.

The tip of the root, called the root cap, has the task of forcing its way into solid earth. For this purpose the root cap is made up of layers of flattened and hardened cells.

Behind the root cap is a thick white down consisting of thousands of tiny hairs. This part of the root has the function of absorbing water, with mineral salts dissolved in it, from the soil.

The liquid absorbed by the root passes from cell to cell to its center. Here it is carried up to the above-ground parts of the plant through slender tubes of xylem and phloem.

As well as taking in water and salts, roots sometimes give out substances in solution. For instance, if the root meets a hard substance such as marble, which is insoluble in water, it gives out carbon dioxide. When mixed with water, this carbon dioxide acts on the calcium carbonate in the marble and turns it into soluble sodium bicarbonate, which the root can then absorb.

Root pressure is the means by which water travels from the soil through the roots of a plant and up its stem. The xylem conducts the water, while the pressure is produced by a combination of osmosis, which forces water from the soil into the cells of the root, and an active pumping mechanism that creates a concentration gradient of salt ions in the xylem. Excessive root pressure may cause 'bleeding' of sap from a wound in the plant or the collection of drops of water from undamaged leaf margins.

Normally, roots grow downward under the influence of gravity and away from light. This reaction enables a sprouting seed to get a hold on the soil.

There are two basic patterns of root growth:

The tap-root system is an extension of the primary root (radicle) of the young seedling, but in fibrous systems this primary root is quickly displaced by numerous fine roots from the base of the stem.

All roots which do not grow from the primary root (e.g., the roots on a rhizome) are called adventitious. Propagation of plants by cuttings relies on the development of adventitious roots on the stem.

At the tip of all roots is a mass of cells – the root cap – which protects the growing point during its passage through the soil. The cells of the root cap are produced by the actively dividing cells of the growing point. as the outer parts of the root-cap wear away, fresh cells replace them. The old cap cells may also lubricate the tip as it grows downward. Cells formed just behind the tip lengthen rapidly and push the tip further into the soil with considerable force.

The growing region is followed by the root hair region. The hairs are outgrowths of the epidermis and are the main organs of absorption. They penetrate the soil and absorb water. The root hairs occupy only a limited region. Hairs in the growing region would be sheared off as the root pushed downward. Each hair has only a brief existence and as the hairs die off they are replaced with new ones further down. The hair region is thus kept at a more or less constant size. Branches – if any – occur behind the root-hair region.

The root contains the same sort of tissues as the stem but the strengthening tissues of the root are centrally placed, reflecting the pulling strain suffered by the root as opposed to the bending strain imposed on the stem.

Cross sections of the root hair region of a typical root are shown in the illustrations. The inner layer of the wide cortex is called the endodermis. The walls of this layer become thickened with a corky substance. Within the endodermis is the stele whose outer layer is of parenchyma cells and is called the pericycle. The protoxylem is on the outside of the xylem tissue (exarch condition) which is star-shaped as a rule. Monocotyledons (e.g., grasses) usually have more "arms" than dicotyledons (e.g., buttercups). A central pith occurs in some species.

Secondary growth (with very few exceptions) occurs only in dicotyledons. A strip of parenchyma inside the phloem becomes active, forming a cambium which grows and makes contact with the pericycle. A continuous wavy ring of cambium is thus formed. The secondary tissues are produced from this. Opposite the xylem groups a ray of parenchyma is produced instead of vascular tissue. If secondary growth is excessive (e.g. in trees) the whole pericycle becomes active and produces a layer of cork outside the stele. The cortex then dies away leaving this corky covering.


Branching in the root

In the stem, buds develop from the outer tissues close to the tip. But if this happened in the root the buds would be torn off as the main root moved through the soil. Root branches develop behind the growing region and are endogenous (i.e., they develop internally). Branching develops before secondary thickening begins. Cells of the pericycle opposite the protoxylem groups become active and produce a growing point just like that of the main root. This new tip grows through the cortex just as the main root grows through the soil. When it breaks out of the parent root the vascular connections are complete and the region is behind that of the root-hairs.

The degree of branching is associated with the size and habit of the plant. Large trees have thick, spreading roots for firm anchorage.

Between the root and the stem is a region called the hypocotyl. In this region the vascular tissues change from the root arrangement to that of the stem, but they are continuous all the way through.

Very often the root is modified for storage. Roots which survive the winter contain food material (e.g., starch) which will be used by the developing shoots in spring. Man has made use of such stores in plants like carrots, turnips, and beet. These are tap roots, but adventitious roots also serve as storage organs. Dahlia tubers and various orchid roots are examples. The food may be stored in the cortex or the phloem.

The climbing roots of ivy are adventitious – arising all the way along the stem – as also are the roots on strawberry runners. Some tropical orchids which grow on tree-trunks have spongy roots exposed to the air. The roots absorb moisture and may contain chlorophyll too.

Maize plants and many others have stilt roots which develop from nodes on the stem and provide extra support. Prop roots are used by the banyan tree. Roots develop in the horizontal branches and grow into the soil. They form solid supports for the spreading branches.

Some swamp-growing plants such as mangroves develop breathing-roots. The swampy soil is poor in oxygen and some root branches, which may or may not be adventitious, grow upwards into the air. Oxygen diffuses into these and into the rest of the root system.