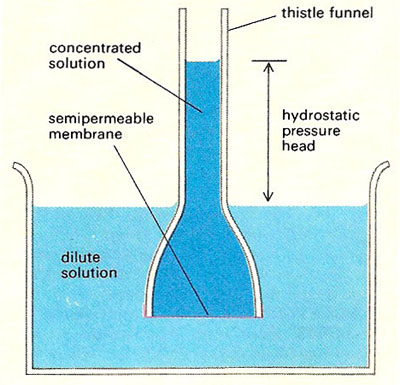 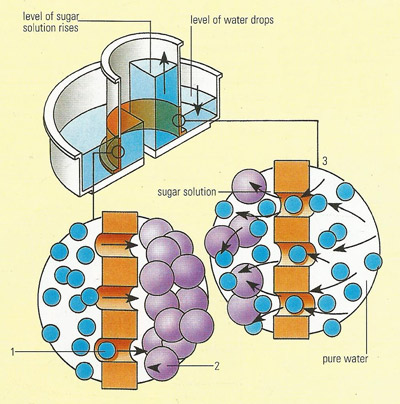 Fig 2. Osmosis in a sugar solution. 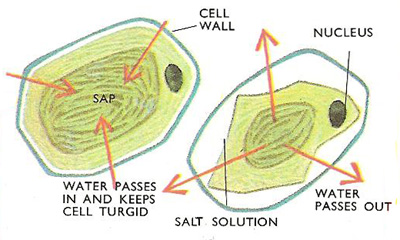 Osmosis is the diffusion of a solvent, such as water, through a semipermeable membrane that separates two solutions of different concentration, the movement being from the more dilute to the more concentrated solution, owing to the thermodynamic tendency to equalize the concentrations (see Figure 1). The liquid flow may be opposed by applying pressure to the more concentrated solution: the pressure required to reduce the flow to zero from a pure solvent to a given solution is known as the osmotic pressure of the solution.

Osmosis was studied by Thomas Graham, who coined the term (1858); in 1886 Van't Hoff showed that, for dilute solutions (obeying Henry's law), the osmotic pressure varies with temperature and concentration as if the solute were a gas occupying the volume of the solution. This enables molecular weights to be calculated from osmotic pressure measurements, and degrees of ionic dissociation to be estimated. Osmosis is important in dialysis and in water transport in living tissues.


Osmosis of a sugar solution

Semipermeable membranes have small pores in them. While the pores allow small molecules through (1 in Fig 2), they also block larger molecules (2 in Fig 2).

All water-living animals, unless they have impermeable skins, must have some method of getting rid of the excess water that they absorb. The process is called osmoregulation and is found in many types of animal. If they did not get rid of the water they would burst because, unlike the case in plants, the cells have no cellulose walls.

It is used in desalination plants to produce drinking water from seawater. The process is generally employed only on a small scale because the pressures involved are so high (up to 25 atmospheres).

Electro-osmosis is a flow of water caused when an electric current is passed through clay or other porous material, in a watery suspension. This phenomenon is caused by the formation of positive and negative ions, one type of which is bound to the clay while the other (in the water) moves toward the opposite electric pole.