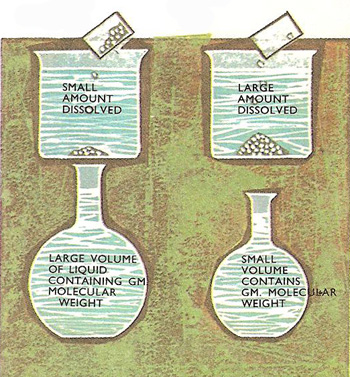 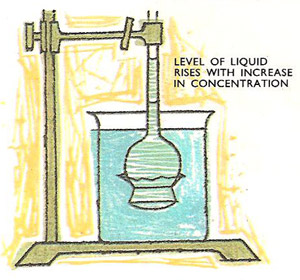 A raw egg, from which the shell has been carefully removed by the action of dilute acid, will quickly lose its characteristic shape and shrivel if it is placed in a strong solution of sodium chloride. However, the egg will rapidly regain its original size and shape when it is transferred to a beaker of pure water. If it is left in this beaker for more than a few minutes, the egg will continue to swell and may eventually burst.

These changes occur because the egg is surrounded by a special type of membrane – a semipermeable membrane – through which water can pass quite easily. However, the soluble salts within the egg and any substances dissolved in the water surrounding the egg cannot pass through this membrane provided it is intact. Should the membrane be damaged in any way, the dissolved substances will pass through as well.

The solvent passes freely through the membranes in both directions, but rather more solvent passes from the side of the membrane where the concentration of dissolved substance is least. The strength of the solution within the raw egg is moderate, so when the egg is placed in water more water molecules pass through the membrane into the egg than come out of it. This explains why the egg swells when it is placed in water. The net effect is always to reduce the strength of the more concentrated solution in an attempt to make the strengths of the solutions on either side of the membrane equal.

The spontaneous flow of fluid through a semipermeable membrane is known as osmosis. many living cells are enclosed in semipermeable membranes so that osmosis is very important in the transfer of fluids to them. The forces which causes osmosis is known as osmotic pressure. The size of this force may be found by applying a small pressure to the side of the membrane on which the concentration of the solution is greater and stopping the flow of solvent through the membrane. This may be done using a mercury column, or the solvent itself may be used to provide the pressure head.

Many of the early investigations into the phenomenon of osmosis were carried by botanists, including a German professor – German Pfeffer (1845–1920). The first results were qualitative rather than quantitative but in 1885 Jacobus van't Hoff reviewed Pfeffer's results and noticed a parallel between osmotic pressure and gas pressure.

Pfeffer himself had shown that by increasing the concentration of the stronger solution its osmotic pressure rose. However, van't Hoff found that the numerical results could best be interpreted if an alternative method were used for expressing the concentration of the solution. Instead of using conventional units (e.g. grams per liter), he found the volume (in liters) which contained one gram molecule of the dissolved substance. (A gram molecule is the molecular weight of the substance in grams.) Using a series of measurements of the osmotic pressure of sucrose solutions of various strengths, van't Hoff found that at constant temperature the osmotic pressure (P) was related to the volume (V) containing one gram molecule in precisely the same way as the pressure and volume of a gas vary in accordance with Boyle's law.

Van't Hoff also found that the osmotic pressure (P) of a solution increases if the temperature (T) rises. This variation follows exactly the same pattern as the changes in pressure of a gas which is heated while its volume is kept constant.

Another limitation on these laws is that they apply only to solutions of substances which have not dissociated into ions. If the dissolved substance does dissociate, the osmotic pressure is higher than predicted because the number of particles in solution is larger than is all the molecules of the dissolved substance had remained unionized. The proportion of molecules which have ionized can be found by comparing the actual and theoretical osmotic pressures.

Thus with the reservations that measurements are carried out with a dilute solution of substances which do not dissociate in solution, this type of determination may be used as a means of determining molecular weights.

This diagram shows a simple apparatus which can be used for measuring the osmotic pressure of a dilute sucrose solution. A piece of cellophane or alternatively a piece of parchment is securely fastened over the end of an inverted thistle funnel. A strong solution of sucrose (of known concentration) is carefully introduced into a bowl of the funnel which is then immersed in a beaker of water.

Waster immediately starts to pass backwards and forwards through the membrane, and after a while the level of the liquid in the stem of the funnel is seen to be rising slowly. When the liquid stops rising, the hydrostatic pressure due to the solution in the stem will balance the osmotic pressure which has forced the water molecules to pass through the membrane into the sucrose solution.

From experiments like this it is possible to obtain very approximate values for the molecular weight of sugar.


Calculation of the molecular weight of a sugar

A solution containing 12 g per liter of a sugar was found to have an osmotic pressure of 1.59 atmospheres at 23°C.

If the unknown molecular weight is M, then

The molecular weight is therefore 183.

Although various semipermeable membranes are available from natural sources they are very susceptible to damage once they have been removed from the parent plant or animal. One of the few exceptions is parchment – a paper-like writing material prepared from the skin of sheep or goats. Parchment is, therefore, used in some experiments in osmosis, but artificially prepared membranes are preferred.

For many of his experiments Pfeffer, and other investigators after him, used a semipermeable membrane made of copper ferrocyanide (Cu2[Fe(CN)6]). This is made by the action of dilute copper sulphate on a dilute solution of potassium ferrocyanide. As this membrane is very thin and fragile it has to be supported on a strong porous framework, and a porous pot was found to be suitable. To obtain the membrane in the walls of the pot, the pot itself is filled with dilute copper sulphate solution. The whole pot is then immersed for a few days in a dilute solution of potassium ferrocyanide. To remove air bubbles from the pores, the pot must first be put in a vacuum vessel for awhile.

The similarities between the pressures exerted by molecules dissolved in a liquid and by gas molecules on the walls of a container led to the bombardment theory of osmotic pressure. The gas molecules exert a pressure because they are constantly bombarding the walls of the container. Similarly, the dissolved molecules are bombarding the semipermeable membrane. But just as the gas volume tries to expand because of the gas pressure so does the liquid volume, letting water molecules through the membrane as it does so. This effect still occurs when the membrane is kept stationary, so water passes into the solution.