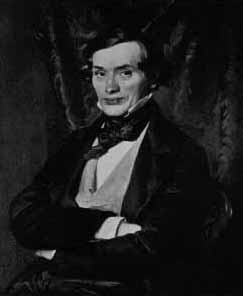 Thomas Graham was a Scottish chemist whose investigation of gases and liquids led to the formulation of Graham's law of diffusion. While working further on diffusion and osmosis he discovered the colloidal state, coining the term colloid. His work on colloids and crystalloids led to the discovery of dialysis.

Graham was born in Glasgow. After studying first in Glasgow and then at Edinburgh, he became professor of chemistry at Glasgow when only 25. While he was there, he carried out experiments on gases, investigating their rates of diffusion.

Some gases diffuse more quickly than others. This had been deduced a few years earlier, when it was noticed that if a cracked flask of hydrogen were inverted with its neck under water, the water rose up the neck of the flask. Hydrogen was diffusing through the flask into the air outside, and it diffused out faster than the air could diffuse into the flask. The water rose to fill the gap left by the hydrogen, in an attempt to equalize the pressures inside and outside the flask.

Thomas Graham timed the relative speeds of diffusion of various gases, and discovered that the denser the gas, the slower its rate of diffusion. The law Graham put forward stated that "If the temperature and pressure of two gases are both the same, then the rates at which the two gases diffuse are inversely proportional to the square roots of the densities of the gases". Put another way, if one gas is four times as dense as the other, then, under the same conditions of temperature and pressure, it diffuses half (i.e. 1/√ 4 times) as quickly. This law, which Graham proved experimentally, was later proved theoretically.

Graham extended his diffusion studies to liquids. He was particularly interested in the way in which dissolved substances passed through tiny holes in a membrane (the skin from a pig's bladder was a favorite kind of membrane used). When they were dissolved in water, most crystalline substances (which Graham called "crystalloids") passed fairly easily through membranes and diffused relatively quickly from one part of the liquid to another. But non-crystalline substances (e.g. glue, or gelatine) diffused very slowly when they were dissolved. Graham called this second class of substances "colloids", and it became clear that the reason for the difference in their rates of diffusion was the difference in size of their particles. Colloid particles are far larger than the molecules and ions present in solutions crystalloids. Since Graham's time it has been found that the division of substances into crystalloid and colloid is not a very good one. Some substances behave like a crystalloid when dissolved in a solvent, but like a colloid in another.

Thomas Graham was elected a Fellow of the Royal Society in 1836, and in 1837 he moved from Glasgow to University College, London. Among other things he designed a pendulum clock, compensated against changes in temperature by having as a bob a small container of mercury. Graham resigned his professorship in 1855 to become Master of the Mint.

Graham's law of diffusion is the principle that the rates of diffusion of gases are inversely proportional to the square roots of their densities.