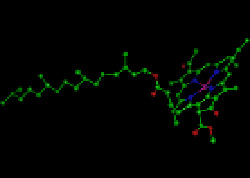 Spatial arrangement of a chlorophyll molecule.

Chlorophyll is the green pigment involved in photosynthesis. It consists of variously substituted porphyrin rings with magnesium, and consists of 55 carbon atoms linked with 72 hydrogen atoms, 5 atoms of oxygen and 1 atom of magnesium. Chlorophyll a is the primary photosynthetic pigment in all organisms that release oxygen (i.e. all plants and algae, including cyanobacteria), while chlorophyll b, c and d and bacteriochlorophyll act as accessory or alternative pigments to type a in certain organisms.

Interestingly, although the Sun radiates most strongly in the yellow region of the spectrum, chlorophyll absorbs most strongly in the red and blue regions, so that it appears far from ideal for the job it does. However, it may be that, in selecting this molecule, nature achieved the best compromise. The biochemist George Wald has said:1

Chlorophyll ... possesses a triple combination of capacities: a high receptivity to light, an inertness of structure permitting it to store the energy and relay it to other molecules, and a reactive site equipping it to transfer hydrogen in the critical reaction that ultimately binds hydrogen to carbon in the reduction of carbon dioxide. I would suppose that these properties singled out the chlorophyll [molecules] for use by organisms in photosynthesis in spite of their disadvantageous absorption spectrum.

The fact that chlorophyll was selected for such a crucial biological task on a planet where its absorption spectrum does not closely match the host star's emission at different frequencies suggests that it may be a universal molecule for this role.

Chlorophyll is high on the list of biosignatures that researchers hope may prove the existence of life on some extrasolar worlds. In particular, as instruments of the requisite sensitivity become available over the next decade or so, they will be searching for the "red edge" effect. Seen at a wavelength of about 700 nanometers, beyond the limit of normal human vision, this reflectance spectrum would be a strong indicator that intense chlorophyll absorption going on.

Astrobiologists are also prepared to contemplate alternatives to chlorophyll on other worlds. The ideal color for a photosynthetic pigment would be black – the color that absorbs all light falling on it. Factors that may determine the precise biochemistry that underlies photosynthesis elsewhere in the universe are the intensity and color of light that a planet receives from its central star and on the planet's atmospheric chemistry.

Chlorophyll a was first synthesized in 1960 by Robert Burns Woodward. The research was performed at the Converse Memorial Laboratory of Harvard University, Cambridge, Mass.

Molecule of the Month (University of Bristol)