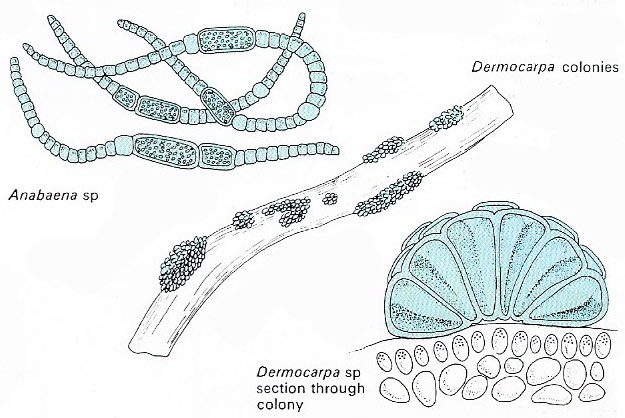 Cyanobacteria are a primitive but successful group well represented in terrestrial, marine, and freshwater habitats, being particularly abundant in muddy places such as salt marshes and paddy fields. They consist of simple cells aggregated into loose or regular colonies such as Dermocarpa, or filaments – branched or unbranched. The colonies may be embedded in a gelatinous matrix. Reproduction is vegetative or by non-motile spores. Some filamentous types such as Anabaena have thick-walled cells and are capable of converting atmospheric nitrogen into ammonia.

Cyanobacteria are a group of photosynthetic and aquatic bacteria that contain chlorophyll and other light-harvesting pigments, including the blue pigment phycocyanin. Cyanobacteria are not only one of the largest groups of bacteria on Earth today, they are also the oldest known fossils, dating back more than 3.5 billion years.

The cyanobacteria have been tremendously important in shaping the course of evolution and ecological change throughout Earth's history. The oxygen atmosphere that we depend on was generated by numerous cyanobacteria during the Archaean and Proterozoic eras. Before that time, the atmosphere had a very different chemistry, unsuitable for life as we know it today. Many Proterozoic oil deposits are attributed to the activity of cyanobacteria. Many also perform nitrogen fixation and are important providers of nitrogen fertilizer in the cultivation of rice and beans. They occur in soil, mud, and deserts; they are most abundant in lakes, rivers, and oceans. Some produce toxic blooms.

The other great contribution of the cyanobacteria is the origin of plants. The chloroplasts with which plants make food for themselves is actually a cyanobacterium living within the plant's cells. Sometime in the late Proterozoic, or in the early Cambrian, cyanobacteria began to take up residence within certain eukaryotic cells, making food for the eukaryote host in return for a home. This event is known as endosymbiosis, and is also the origin of the eukaryotic mitochondrion.