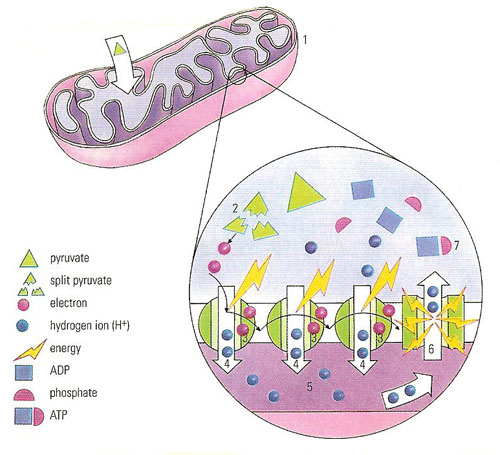 The mitochondrion as a provider of energy to the cell.

Mitochondria are mobile, self-replicating organelles that occur in various numbers, shapes, and sizes in the cytoplasm of all eukaryotic cells. They contain their own genome that is separate and distinct from the nuclear genome of a cell. The origin of mitochondria is explained by the endosymbiotic theory.

Mitochondria have two functionally distinct membrane systems separated by a space: the outer membrane, which surrounds the whole organelle; and the inner membrane, which is thrown into folds or shelves that project inward. These inward folds are called cristae. The number and shape of cristae in mitochondria differ, depending on the tissue and organism in which they are found, and serve to increase the surface area of the membrane.

Mitochondria are the site of the citric acid cycle, also known as the Kreb's cycle, which is a vital metabolic pathway for generating energy in eukaryotic cells.

Cells are powered primarily by energy released from ATP (adenosine triphosphate) as it becomes ADP (adenosine diphosphate). ATP is made in the mitochondria (1, see diagram below) by recycling ADP. The first step is to split pyruvate (2) – a fuel molecule derived from glucose in the cytoplasm – into carbon dioxide, hydrogen and high-energy electrons. These electrons pass along a line of proteins in the inner membrane (3), giving them energy to pump out protons (4) into the intermembrane space (5). As more protons are pumped out, a pressure builds up in the space, forcing protons back across the membrane. But the protons can only flow back into the matrix via the ATP generator (6) – the enzyme ATP synthetase – and as they do so they drive round the blades of this turbine, producing ATP (7).