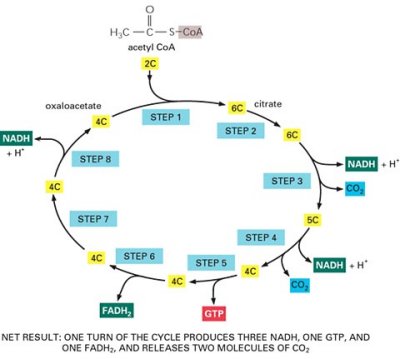 The citric acid cycle is an important energy-generating metabolic pathway, also called the Krebs cycle (after the German-born British biochemist H. A. Krebs who identified it) or tricarboxylic acid cycle; it forms the final stage in the oxidation of carbohydrates, fats, and proteins in cells. The citric acid cycle occurs inside the mitochondria of cells and is capable of producing enough ATP (adenosine triphosphate) to run all of the cell's functions.

The citric acid cycle begins with a glucose molecule, which during the process of glycolysis is stripped of some of its hydrogen atoms, transforming the glucose into two molecules of pyruvic acid. Next, pyruvic acid is altered by the removal of a carbon and two oxygens, which go on to form carbon dioxide. When the carbon dioxide is removed, energy is given off, and a molecule called NAD+ is converted into the higher energy form, NADH. Another molecule, coenzyme A (CoA), then attaches to the remaining acetyl unit, forming acetyl coenzyme A (acetyl CoA).

All in all, the citric acid cycle is capable of generating from 24 to 28 ATP molecules from one molecule of glucose converted to pyruvate. Therefore, it is easy to see how much more energy we can get from a molecule of glucose if our mitochondria are working properly and if we have oxygen.