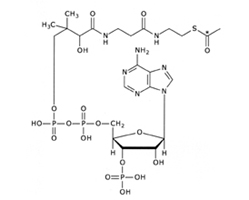 Acetyl coenzyme A is a coenzyme derivative in the metabolism of glucose and fatty acids that contributes substrates to the citric acid cycle (Krebs cycle). It is formed when pyruvic acid is broken down during the formation of fat from carbohydrates. Commonly referred to as acetyl CoA, it is also a key intermediate in the biosynthesis of lipids. Acetyl coenzyme A is formed when a two-carbon acetyl group is added to the coenzyme A carrier group. CoA thus acts as the carrier of the acetyl group, which is the basic building block of fatty acids.